Dealing with defeat: Winless Trojans look to reset mentally as they head into conference play 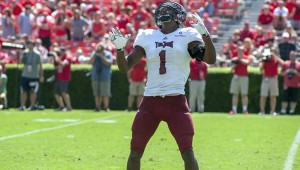 Junior defensive back Montres Kitchens reacts as he misses an opportunity to intercept a Georgia pass in the Trojans 66-0 loss to the Bulldogs on Saturday. With the team off to an 0-4 start, head coach Larry Blakeney said players and coaches have to resent mentally before they begin conference play Saturday at University of Louisiana-Monroe.
MESSENGER PHOTO/JOEY MEREDITH 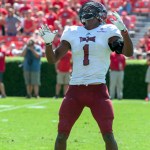 Junior defensive back Montres Kitchens reacts as he misses an opportunity to intercept a Georgia pass in the Trojans 66-0 loss to the Bulldogs on Saturday. With the team off to an 0-4 start, head coach Larry Blakeney said players and coaches have to resent mentally before they begin conference play Saturday at University of Louisiana-Monroe. MESSENGER PHOTO/JOEY MEREDITH 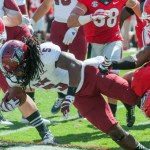 Nobody associated with the Troy Trojans expected the football team to be winless four games into the season.

But they are, and now the players and coaches must figure out how to reset before they head into conference play.

“You need to put those things out of your mind and behind you, and move on,” head coach Larry Blakeney said during Monday’s press conference. “Those guys that dwell on the negative cannot play this game.”

The Trojans, 0-4, are coming off an agonizing 66-0 defeat at the hands of the Georgia Bulldogs on Saturday. “This is probably an exceptional SEC team,” Blakeney said Monday. “We were unable to do much to stop them, unable to move the ball on them and we even gave up things on special teams, where we have been decent.”

Now, with a week to prepare before the conference opener at the University of Louisiana-Monroe on Saturday, Blakeney said the team is focusing on a clean slate.

With eight games remaining, moving into Sun Belt play will not be a smooth transition for the Trojans.

“ULM has been a tough place for us to win,” Blakeney said. “It would be some great medicine for this team to go to ULM and win one the road against a good, well-coached team. Todd Berry (ULM coach) has proven himself to me as one of the best in the business and in our league.”

The Warhawks currently sit atop the Sun Belt with a 2-1 record and are undefeated in conference play, mostly due to their stiff defense that is allowing just over 300 total yards a game.

Troy offensive coordinator Kenny Edenfield has a lot of respect for ULM’s knack for stopping other teams, and has an idea of what makes them so successful.

“I’d say they’ve got a good defense,” Edenfield said. “Statistically they’re pretty high. I think it comes from confusing people, a lot of twisting, a lot of slants and lots of blitzing.”

Blakeney agreed. “Their movement is problematic. They move around. They know where they want to wind up, but they will show you a lot of stuff in pre-snap and standing up, moving around, cross charges, twist, etc., but they are still going to be in gap control when the ball turns over. They are simple coverage wise. We just have to make sure we know where they are and get them blocked up.”

The Trojans have already had plenty of issues moving the ball and scoring points this year, and the 66-0 shutout against the Georgia Bulldogs was the first scoreless game for Edenfield since taking over the offense five years ago.

He explained that a lack of execution has been a major issue for Troy and it can be difficult on the offense, especially against an elite team like the Bulldogs.

“When you play a team like we did last week, you get opportunities early, which we had,” Edenfield said.

A big part of sustaining drives for the Trojans has been with their stable of running backs, but lately it’s been a non-factor in the offensive scheme.

While the passing game has had some issues as well it’s no secret that moving the ball on the ground has gotten away from Troy recently, but those two phases of the offense work hand-in-hand.

“When your passing game is very average, which it’s been the last couple of weeks, then your run game has either got to be really, really good or you’re going to struggle,” Edenfield said.

No decisions have been made yet on whether or not quarterback Brandon Silvers will be available after suffering a concussion in the second half against Abilene Christian two weeks ago. “I don’t know if he’s ready to go to practice, yet,” Blakeney said. He will need to practice before we can put him out there. I’m hoping maybe (athletic trainer) Chuck (Ash) will let him try early in the week to see if he can prep for the game. If so, then he will be in the mix. If not, we have Dontreal (Pruitt). Pruitt obviously wasn’t perfect, wasn’t great, but he did some good things against a really good team.”

Blakeney said Pruitt needs “snaps in practice to learn exactly where he needs to go with his pre-snap and post-snap reads. Time in practice is what he needs.”

The Troy-ULM game kicks off at 6 p.m. and will be broadcast on the Sun Belt Conference Network and ESPN3.