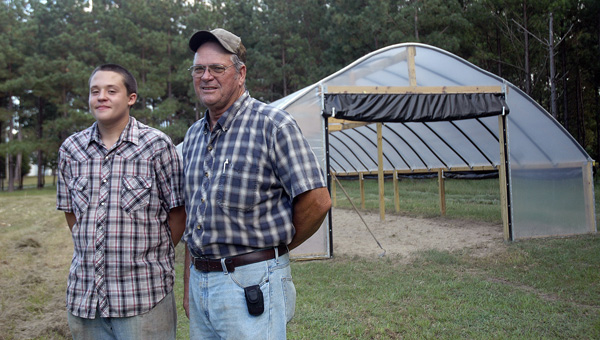 Wesley Williams and his granddad, Doug Phillips, have constructed a hoop house at their farm in the Josie community. A hoop house uses incoming solar radiation from the sun to warm the plants growing inside faster than the heat can escape the structure. A hoop house extends the fall and early spring growing seasons. Below, Wesley has done most of the preparation for the planting season at his hoop house near Josie. The preparation included preparing the soil with a hand tiller and a hand hoe. Williams will plant spinach, turnips, potatoes and lettuce this fall. He plans to plant tomatoes in early spring along with other spring vegetables. (Messenger photo / Jaine Treadwell )

Wesley Williams is included in the two percent.

Williams, his mom and dad and six brothers and sisters, live on a farm in the Josie community. They grow most of their food. They have a milk cow, goats, sheep and chickens. They hunt and fish and garden and are proud to be in the dwindling two percent of Americans.

Even at a relatively young age, Wesley Williams knows that farming will be his chosen occupation. His plans are to join the nation’s one percent as a young farmer.

Williams knows and understands that farming is a hard business and a risky one. He knows that, to make a living in farming, he will have to work long, hard hours and be forward thinking. He’ll have to be innovative and willing to take a risk every now and then.

And, he’s already doing all that.

Williams and his granddad, Doug Phillips, who also lives on the farm, are on the cutting edge of hoop house farming in Pike County.

A hoop house is made of polyethylene and is usually semi-circular, square or elongated in shape. The interior heats up because incoming solar radiation from the sun warms plants, soil, and other things inside the building faster than heat can escape the structure. The purpose of a hoop house is to extend the garden growing seasons. Hoop houses are different from greenhouses because they usually have no heating system or ventilation fan.

Williams and Phillips’ first house, a 20×48-foot hoop, is up and ready for the fall planting season.

“This is mainly Wesley’s project,” Phillips said. “I’m just helping out. He’s doing a good job and, if the hoop house is successfully like we believe it will be, we’ve got space for another one to three houses in the future.”

Williams said the hoop house concept is not new.

“The concept has been used in the northern states for a good while because their growing season is so short. But, people in the South like to have fresh produce during the winter and early spring months, too.”

Williams said he hopes he’ll be able to produce a variety of vegetables first, for his family during those months, and later to sell for a few extra dollars.

Phillips said he believes there will be a market for fresh vegetables during the off-season months and the venture could be a profitable one, as well as a learning one for his grandson.

The dust has not settled quite yet in the Williams/Phillips hoop house but already, the construction phase and preparation process have been valuable learning experiences.

Williams said some hoop houses are constructed using metal frames but he and his granddad used wood because it was easier to handle and to work with.

“I attended a workshop and got really interested in hoop houses,” he said. “I’ve talked with people at the NRCS and at Tuskegee University. They have given me a lot of good information about building a hoop house and growing garden produce using solar heat.

“A hoop house will be 20 degrees warmer than the temperature outside the house. We don’t get a lot of temperatures in the teens and 20s so we should be able to grow vegetables well into the winter and start the growing season early in the spring.”

Williams and Phillips used horse manure from their farm to prepare the sandy soil and plan to use no pesticides and very little commercial fertilizer.

They are making their own fertilizer from fish parts that have been dissolved in water.

“That should give our plants a good boost and off to a good start,” Phillips said.

“All the weeds are out of the house and, after three years, we’ll disc up the dirt, flatten it out, wet it down and cover it with plastic. The heat in the house will kill any bad stuff growing in the soil and it will be ready for another three years of planting,” Williams said.

Williams’ first fall garden crops will be potatoes, lettuce, spinach, broccoli and turnips and perhaps kale. And he’ll use the square-foot garden concept.

“Down the middle of the house, we’ll have a two-foot wide walking space,” he said. “Between the rows, there will be only enough space to put one foot right in front of the other – about four inches. That way we can get more plants in the ground.”

The “roof” and upper sides of the hoop house are covered with plastic and the bottom sides have a tarp that can be raised to let air in or let down to hold the heat in.

The most efficient way to control the temperature is with the tarp. However, Williams said, if more heat is needed, the soil could be wet down.

“Wet soil is darker and dark soil will soak up the sun and give off heat,” he said. “If the house gets too hot, a shade cloth can be used to cool it down.”

Although he has learned a lot through the construction phase and preparation process, Williams said the real learning will begin when he puts the first plants in the ground. The reward will come with the first harvest and the knowledge that he is on the way to being among one percent of America’s population.