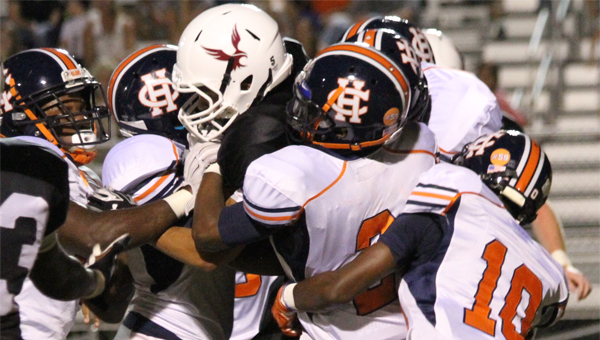 MONTGOMERY – The Trojans of Charles Henderson got back on the winning track in a big way Friday night with a 69-30, Class 5A, Region 2 victory over Alabama Christian Academy at Wade Black Norton Memorial Field in Montgomery.

CHHS pulled out all the stops on offense, special teams, and the defense was outstanding against the ACA Eagles. Senior quarterback Austin Ingram threw four touchdowns, while Jalanate Smith had three touchdowns on the evening, and teammates Reilly Fox and Jared Wilson each had two touchdowns.

The Trojans placed emphasis on leadership and positive attitude this week in practice, and head coach Brad McCoy believes it showed Friday night in the win.

“I really think our team approached this game in a lot different fashion,” McCoy said. “Sometimes you have to learn from making mistakes, especially mistakes we made over the last two weeks, and that is what I commended our guys on after the game. I thought we came out tonight and the leadership was better, we made plays that we did not make the previous two weeks.

“We have got to continue to get better, and tonight is just one game. You can’t get satisfied and complacent. We have a chance to play at home in the first round of the playoffs if we can put these wins together. I think that’s our goal right now. Even though we didn’t get it done last week, we got to work on winning the next one.”

CHHS wasted no time getting on the scoreboard, taking the opening kickoff and moving 45 yards in six plays as Ingram completed three consecutive passes, including a 28-yard gain to Fox, followed by a one-yard touchdown carry by the freshman running back Wilson. The extra point by Ben Salmon was good for the 7-0 lead.

ACA punted on their next possession, and on the first play of the drive Ingram hit Fox again for a 39-yard touchdown pass, Salmon added the PAT, and the Trojans were up 14-0.

The Eagles again punted, and Mondaris Dixon broke the return down the sideline to the ACA 4-yard line, and three plays later Wilson ran it in for the 21-0 lead, with Salmon’s PAT.

Fox scored his second touchdown of the evening on a three-yard pass from Ingram in the closing minutes of the first quarter, and Salmon’s extra point was good for the 28-0 lead.

The Trojans went ahead 35-0 with 11:34 remaining in the first half when CHHS junior defensive back Omari Vaughans picked up a loose ACA fumble and scrambled 20 yards for the touchdown.

The Eagles got on the board with 10:20 remaining in the half on a 20-yard field goal by Hunter Hanson, cutting the CHHS lead to 35-3.

CHHS bounced right back on their next possession with Demario Harris taking the kickoff and finding nowhere to run to his right, reversed his direction and took the ball to the ACA 25 before being dragged down.

On the first play from scrimmage, Ingram hit junior Smith for a 25-yard touchdown, the PAT by Salmon was good, and CHHS led 42-3 with 9:54 remaining in the first half of play.

ACA did not keep the ball very long as two plays into their next possession Marquis Simmons intercepted the ball, giving the Trojans the ball at the ACA 41. Smith scored the next touchdown on a 6-yard run, and the Trojans led 48-3 as the extra point conversion was no good.

With 3:34 remaining in the first half, a power failure put the stadium in darkness, but power was restored and play resumed 30 minutes later.

The Eagles came out hot after the break, as quarterback Chandler Taylor connected with Ethan Anderson for a 10-yard touchdown pass reception, and the extra point by Hanson was good cutting the CHHS lead to 48-10.

Each team swapped possessions in the second half before the Trojans got on the board with Ingram connecting on four passes and Mondaris Dixon carrying the ball three times, including the 3-yard carry for the touchdown. The extra point by Conner Adler was good and CHHS led 55-10.

Ingram threw his fourth touchdown pass of the evening lofting a 52-yard strike to Kobe Griffin with 3:09 left in the third quarter, and the PAT by Will Young was good for the 62-10 advantage.

ACA got back on the board when Jack Martin scooped up a fumble and raced 30 yards for the touchdown, cutting the lead to 62-16.

CHHS bounced right back with another score when facing fourth and two at their own 43, Smith faked the punt and sprinted 57 yards down the right sideline for the touchdown, and the 69-16 lead with 11:09 left in the game.

ACA running back David Poole scored a touchdown from 11 yards out with 6:12 to go in the game, and backup quarterback Grayson Blackwell later hit Wesley Pugh for a touchdown strike of 36 yards for the last Eagle score, and the 69-30 final.

The Trojans improved to 2-2 on the year and 1-1 in Region 2 competition, and will host Class 7A Davidson of Mobile this upcoming Friday night in Veteran’s Memorial Stadium of Troy, while ACA, also 2-2 and 1-1, will travel to Fultondale. 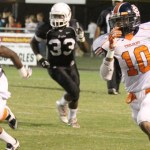 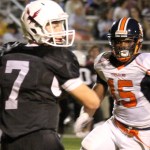