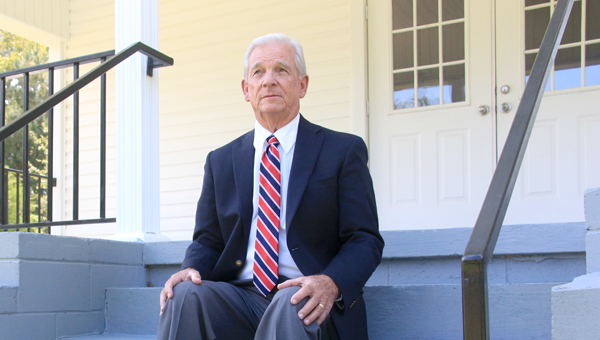 Rev. Mack Lowery sits on the steps of Mt. Moriah Baptist Church for a protrait. He is retiring after 52 years as a pastor.
MESSENGER PHOTO/APRIL GARON

After a little more than 52 years as a pastor, the Rev. Mack Lowery is retiring and he says replacing his time spent with the church won’t be easy.

Lowery said his calling came to him at the ripe age of 8 when his family was at a revival in 1947.

“Back in my time there was a lot of hellfire and damnation being taught,” Lowery said. “But, in that revival, I was convicted of my faith. I went home and professed my faith to myself that night.”

Lowery said two years later was his official pronouncement, but that life comes along but he had always felt the pull to be a pastor and finally committed his time to serving the Lord in that capacity.

Lowery said his first sermons were taught to the black inmates in Macon, Ga.

“I was there one night preaching, and back then it was still separated, but I asked them if it wasn’t breaking any rules if they would like me to preach to them that next Thursday,” Lowery said. “It got to kind of be a thing after that. All the boys wanted to speak to the black inmates. Leaving Mercer and the black inmates was kind of hard.”

In 52 years, Lowery could only remember two Sundays he had missed church, once for being sick and another time after he had surgery. But, Lowery said in his last 10 years serving Mount Moriah Baptist Church, he hadn’t missed a single one.

“We would take vacations occasionally, but the older my wife and I got, the less we took,” Lowery said.

“No matter what, I always managed to be home on a Sunday, so I figured if I was home, I might as well go to work.”

Lowery said he doesn’t use what he calls a “sermon barrel” to preach, either.

“I don’t have a sermon barrel, and I don’t preach from a sermon barrel,” Lowery said. “I read and study subjects I’d like to talk about. I like to do it off the cuff, and I very seldom use an outline. I probably have about 12 sermons I will preach, not a lot, but that I will use on occasion.”

Lowery said he loves art and history, and when he’s needed Lowery said he substitute teaches for the Troy City School System. Lowery said his favorite students to be in charge of were art students.

“It’s easier to do those kinds of classes,” Lowery said. “Students are usually there because they want to be. They enjoy doing art. They know what they’re doing.”