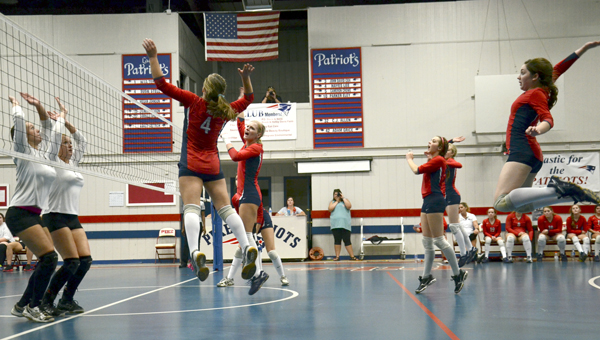 The PLAS volleyball team jumps with No. 4, Callee Jinright as she stretches to return a Colt ball. Below inset, Mya Terry readies to serve the ball to the Colts during their area match-up Tuesday night
MESSENGER PHOTO/SCOTTIE BROWN

While it’s been a hard fought battle for the varsity Patriots, head volleyball coach Mendy Avant said the girls are consistently trying to get better and fall into a groove as the season progresses.

“We’ve changed our rotation,” Avant said. “We’re trying to get settled with it, and I know it’s hard when you’ve got so many on the bench, but you’ve got to get six that are working together and subbing and setting each other. We might finally hit that rotation, I hope.”

With six seniors on the team, No. 5 Grace Capps has stood out for Avant as a leader.

“Grace Capps is standing out big time,” Avant said. “She’s a leader. If I need to tell (the players) something, she’ll let them know. She’ll organize us to go watch Troy volleyball and eat dinner together. She does more than just practice hard. She’s just a great kid.”

The Patriots will play Glenwood at home next Tuesday for senior night. Although the team was progressing, Avant said there were still a few things to work on before their next game.

“We need to work still on our coverage,” Avant said. “You’ve got a coverage for hits and a coverage for tips, and just getting there making sure we’ve got it covered. Today was a good day. That put us number one in our area, so if we can just hold on.”

The junior varsity team also played Tuesday night, but lost in the tiebreaker against the Colts.

“They’ve gotten so much better,” Avant said. “They couldn’t pull it off. They lost in the tiebreaker, but, still, they played hard, they get better and better every day. We’ve been subbing in some, but all six are really improving. At JV level, you’re not really sure we’re they’re going to be and doing their part. They keep working. They want to practice all the time.”