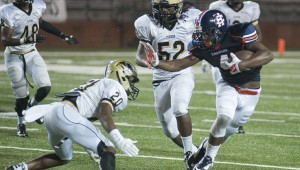 No. 4 for the Trojans, Kobe Griffin, attempts to maneuver around a Greenville defensive player during their matchup. The Trojans will travel to Montgomery Friday to face Alabama Christian Academy.
MESSENGER PHOTO/JOEY MEREDITH

Following back-to-back losses decided by an assortment of big plays that separated victory from defeat, Charles Henderson High will hit the road Friday to visit a solid Alabama Christian Academy team, with the Trojans hoping to improve on what has been a positive start despite their 1-2 overall record.

ACA and the Trojans will square off at 7 p.m. Friday evening in Montgomery, where the Eagles are 2-1 for the year, with a 39-20 win over Prattville Christian, a 38-21 loss to Rehobeth and a 40-8 win over Booker T. Washington.

CHHS opened the year with a 38-6 win over Daleville, then dropped a 38-20 decision at Dale County, followed by a 19-16 loss to Greenville in Troy.

Charles Henderson High head football coach Brad McCoy said his Trojans have shown great leadership and positive attitude during practice this last week, and believes that is critical as the young team continues to grow.

“We met a lot Tuesday talking about the leadership factor,” McCoy said. “Today at practice, I could see some guys maybe stepping up. I think they are listening to us. I do not know if that is going to equate to a win, but I think we are improving in that area, and I think that is going to help us.

“One of the biggest things you have to be careful about, you can turn too negative in a hurry when you are not winning. There is a fine line and a delicate balance that we have got to create. You have got to keep the kids positive and their heads up but you have also got to demand a lot out of them. They cannot go into each day of practice asking, ‘Why am I working so hard and not getting anything out of it?’ So, that’s the psychology out of it. To give ourselves a chance, we know how much work we have to put out. Anything less than that is not going to give us a chance.”

The Trojans will have their work cut out for them against ACA in this Class 5A, Region 2 matchup, as they face a stellar quarterback in Eagles’ senior Chandler Taylor. The 6-1, 210 lb. quarterback is a lefty that is considered one of the top baseball prospects in the state and has already made a verbal commitment to the University of Alabama.

“Offensively, they have a very good quarterback” said McCoy. “He’s got a tremendous arm, throws the ball very well and can run. He’s a big kid, maybe 6-0, 210, just a tremendous athlete. So the offense, and the whole team, kind of revolves around him.

“You really would not compare them to Greenville, as they had tremendous athleticism all over the field, and ACA is probably a little bit more fundamental based. They just don’t awe you with size. They do have a couple of big receivers. They got pretty good team speed. They fly around the ball on defense, just tremendous fundamentals. They will not really mess up. They will not be in the wrong spot. They are going to tackle well. They just don’t make many mistakes as a team. For us to have a chance, we have got to try to eliminate our mistakes we have been making the last couple of weeks, and really execute at a high level for us to have a chance.”

The Trojans have moved the ball well this season and put points on the board, while the defense has also been able to play well at times.

Youth and inexperience has been the difference for the team, as the Trojans return only two starters on offense and three on defense from a team that reached the Class 4A state championship game just a year ago.

Coach McCoy is eager to take his Trojans to what he expects to be an exciting football atmosphere at ACA.

“Alabama Christian brings a lot of people to the games, they have great facilities, and they won big last week,” said McCoy. “They are coming in with a lot of excitement as well. We have got to find a way to match it and play football the way our kids know they can play the game. We don’t need to overthink it. We have just got to continue to play hard, play fundamental ball, and don’t overthink it we must continue to make plays and eliminate the big ones on the other side.

“Our coaches and I, we believe in our kids. Even though we got a lot of new ones, they want to get better, they are trying to get better and they will continue to get better. We believe in everything they are doing. It is not always pretty. It is a way of us trying to get the bull by the horns, to get them to where they need to be but that’s our job. If we can get the guys to start doing a little bit more self-motivation and self-leadership among each other, that will just increase our chances to get better.”

Leaders on offense this season for the Trojans have been senior quarterback Austin Ingram, who has completed 57-percent of his passes for 576 yards and five touchdowns, with Jalante Smith making 18 receptions for 298 yards and all five of the touchdowns.

Mondaris Dixon has rushed for 269 yards in three games and three TD’s, for an average of 89.7 yards per game. Throw in the punt and kickoff return duties, and Dixon averages 180.7 yards of all-purpose yards per game.

Kickoff is slated for 7 p.m. this Friday evening in Montgomery.