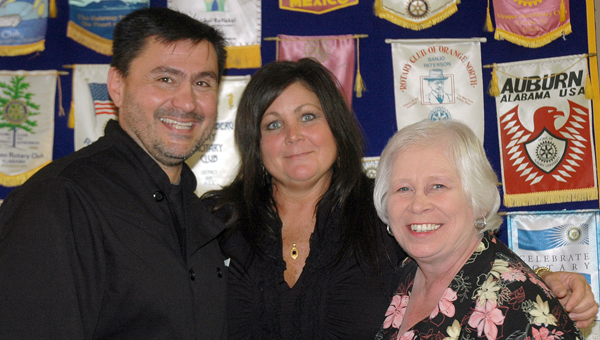 Messenger Photo / Jaine Treadwell
Yanni Tempelis and Denise Taylor were program guests of Rotarian Cookie Graham at the Wednesday meeting of the Brundidge Rotary Club. They shared photos and stories of their recent trip to Greece, which is Tempelis’ home country.

Yanni Tempelis and Denise Taylor took the Brundidge Rotarians on a virtual tour of Greece at the Club’s Wednesday meeting. And, when the tour was over, the Rotarians knew a lot more about the country and its culture than they ever imagined. And, several were considering punching their tickets for the 6,500-mile journey to “paradise.”

That’s the impression Tempelis gave the Rotarians of his homeland and same impression Taylor has of the country to which she now has ties.

Tempelis was born and raised in Athens, Greece. He served two years in the “Special Operations” unit of the Greek military. He came to the United States in 1996.

He holds citizenship in both the United States and Greece and speaks both languages fluently.

His desire was for Taylor to see his home country but not as a tourist. He wanted to take her to meet his family, to visit the places special to him and to experience Greece as he knew and loved it.

Even before Taylor recovered from jetlag, she felt a part of the Tempelis family. She found herself in awe of the beauty of the mountains and the beaches and fascinated by the country’s rich and long history.

Tempelis and Taylor shared photographs of their recent two weeks in Greece with the Rotarians. His commentary included family, history and culture that enhanced the photos.

“Greece is a party country,” Tempelis said. “But even so, Greece has the lowest percentage of alcoholism in Europe. For Greeks, drinking is no big deal. But the legal drinking age is 18.

“In Greece you can do three big things when you are 18. You can drink. You can vote and you can drive.”

The prevailing religion in Greece’s constitution is the Greek Orthodox Church.

“The churches are elaborate with many paintings inside,” he said. “The Greek Orthodox Churches are ‘dressed up.’”

All levels of schooling, elementary through high school, are under one roof and all education is free, including college.

“But you can’t be a student forever,” Tempelis said, laughing. “I attended college in Athens and earned a bachelor’s degree in civil engineering. My father is an engineer. I come from a family of engineers.”

He also comes from a family of great cooks, especially his mom. From her, Tempelis developed a passion for cooking. He has owned Greek-Italian style restaurants in Troy. He and Taylor now own and operate the Pig Café and Catering in Troy.

Because Greeks – and tourists — love to eat, a career in the culinary arts is a wise profession in a tourist hot spot.

“Greece is not an agricultural country and it does not have heavy industry,” Tempelis said. “We have to depend on others to do business. What Greece sells is water and sun. But, when there’s a recession, Greece is hit hard because people won’t use their disposable income to travel 6,000 miles for water and sun.”

Greece is third in the world in olive production so, for those who like olives, Greece is the place to be.

Tempelis and Taylor closed their presentation by sharing a sweet treat that she learned to bake from his mother.

“Mine’s not as good as hers but I’m learning,” Taylor said.

The Rotarians agreed that Taylor has learned well. Their only complaint was that she didn’t make enough of the treat for thirds.