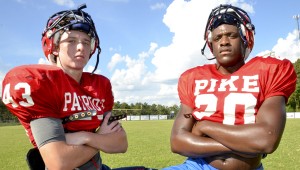 Tyler Hussey, left, and Tamaris Jamison, right, have played leadership roles over the last few weeks for the Patriots, Allen said. Both players feel the team has had a change in attitude since the season started.
MESSENGER PHOTO/SCOTTIE BROWN

Tamaris Jamison, a senior fullback and defensive end for the Patriots, is a new face on the Pike Liberal Arts Patriots this year.

But head coach Gene Allen said Jamison has shown leadership roles since his first day on the field during summer practice.

“I like to show my actions on the field, and if I can get a chance to talk to them and get them pumped up, I’ll do that,” Jamison said of his teammates.

Jamison said the largest change he has seen in his teammates since day one was in heart, and Allen agreed.

“I think if we just keep working to get better, we’ll win this week and from here on out,” Jamison said. “We’ve started to play with a little more heart, and playing like we have something to prove. We’re not just going out there and putting on a jersey to play.”

Tyler Hussey, middle linebacker for the Patriots, has led the team in tackles against Monroe Academy and Morgan Academy. Hussey had 11 tackles in the Pats 27-13 win over the Senators on Friday.

Focusing on the little things in practice has made the difference for him and the team, Hussey said. “Nothing really changes from day-to-day,” he said. “We work on perfection for offense, and repetition on defense, getting in form for tackles.”

Like Jamison, Hussey is emerging as a leader on the field, as well.

“I think I’ve showed some classmates that just because we’re in tenth grade doesn’t mean we can’t play or be leaders,” Hussey said. “It means a lot to lead two games in tackles and be a sophomore.”

The Patriots, 3-1, will travel to Montgomery to face Evangel Christian, 1-2, this Friday night. While the team will be on the road, Allen said he was glad the game isn’t against a region opponent. The Patriots have several players on the mend.

”It’s not a district game which is good for us because some of our kids are banged up,” Allen said. “We have three players that are hurt that won’t play this week, or either they’re sick.”

Despite the internal challenges, Allen said he is pleased with his team’s continued improvement. “I think they’ve gotten better, and that’s our main goal is to get better, and better,” he said. “Our goal is to go out there and get a win, and we’re going to do whatever it takes to get one.”

Kick off is slated for 7 p.m. at Evangel Christian.