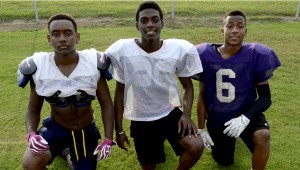 Left to right, Jalen Psalmonds, Frank Harris and Jabronski Williams are all sophomores on the Goshen football team. Snyder said while his team was young, they were able to accomplish the tasks given to them. The Goshen Eagles are currently 2-1 for the season.
MESSENGER PHOTO/SCOTTIE BROWN

With two region wins under their belt, the Goshen Eagles are off to a strong start this season. And head football coach Bart Snyder says that’s due in no small part to some of the younger members of the team.

Goshen’s only loss is to Pike County early this season, but the Eagles are making a strong statement beating two athletic teams in their region, Luverne and New Brockton. Throughout the first three games, Snyder says many of his youngest players have been making the most moves on the field.

“Our senior and junior leadership (has been) coaching those guys while they’re on the field, that’s the biggest thing,” Snyder said. “But the overall effort each of those young guys put on the field is amazing to us. They’ve been able to come up with some large plays over the last three weeks. Even in our game against Pike County, we were asking young guys to step up and play a team with a reputation as good as Pike County.”

Jalen Psalmonds is a sophomore for Goshen who Snyder said has consistently been making big plays for the Eagles. In their most recent game against New Brockton, Psalmonds’ two interceptions had a major impact on the result of the game.

“Well, I got back in my drop zone, or coverage area, like my senior linebacker Tyler had told me,” Psalmonds said. “I did exactly what he told me and sat there. I waited, and (the quarterback) threw the ball. At first, I didn’t realize I caught it until I realized it was in my hands. I just knew to run with it. The second interception, it was just like the same thing, but there was more of an open field so I just did what I could.”

Running back Jabronki Williams said while he was just a sophomore he tried to set an example for the players below him.

Frank Harris, running back and defensive end, said he felt that it was a team effort to be able to play the way Goshen has in the last three weeks.

“We always talk to each other about everything,” Harris said. “Most of the time, all the players, even outside of school, will be with each other. So, I believe we’ve got good teamwork. I think that helps us be undefeated. We all just get along …

“As long as we get along and have good teamwork, we’ll keep doing well. I think we all want to win. It’s not just that we’re all playing. We want to win and get somewhere.”

Harris credits the motivation being carried throughout the whole team for the strong start to the season.

Goshen will host Calhoun Friday in Eagles Stadium at 7 p.m.