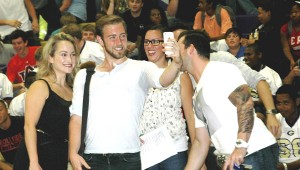 Members of the Canada-based Vivance quartet posed for a selfie with the students at Goshen High School on Tuesday afternoon. The group toured area schools as part of a program sponsored by the Troy Arts Council. The quartet also performed at a public concert on Tuesday.
MESSENGER PHOTO/JAINE TREADWELL

The students at Goshen High School on Tuesday received a rather rare musical treat for a rather rural South Alabama school.

And, perhaps to the students’ surprise, they realized they liked classical music, maybe even opera.

“Is that opera?” one student whispered to another. “I kinda like it.”

Vivace, a Vancouver, Canada-based quartet, performed at GHS Tuesday afternoon. The performance was sponsored by the Troy Arts Council as part of its school outreach program.

Vivace was the opening performance for the TAC season calendar at the Claudia Crosby Theater Tuesday night.

John Jinright, TAC presenter chair, said the arts council often makes arrangements for visiting artists to perform at one of the schools in the county.

“We were so pleased to be able to offer this performance to Goshen High School,” Jinright said, following the performance. “Vivace was very well received by the students. Some of them were introduced to a different kind of music and I think, from their response, they really enjoyed it.”

Jinright said he can hardly wait to offer other performance to schools within the county.

“I think the students benefit greatly from these performances.”

Quartet member Tiffany Desrosiers told the students the group had traveled 19 hours to get to perform for them.

The students responded with applause.

“Other times we take pop and make it more classical. Sometimes we write our own music.”

The quartet opened with “1000 Years” from the “Twilight” series. Their program included “Requiem for a Soldier” from “Band of Brothers” and “O Sole Mio” with an Elvis twist. They closed with “A Prayer.”

The students were given a Q&A opportunity and were curious to know how the group got together and were probably surprised by the answer.

Vivace is not made up of friends who aspired to achieve fame and fortune with their music.

DJ Calhoun said the group was actually put together by a management group to sing at the 2010 Winter Olympic Games in Canada.

“I was stressed before the performance because we only had a short time to practice,” Calhoun said.

“If Canada had lost, everyone probably would have left but that didn’t happen and everyone was in great spirits, and we had an amazing concert,” Devigne said.

Melody Courage gave the GHS students an idea of what it takes to be a professional singer.

“I had seven years at the university and I continue to take singing lessons at $75 an hour,” she said. “It’s expensive but it’s important to continue training and to be aware of new techniques.”

The road on which Vivace has traveled has been a long and determined one but all four agreed that they are happy doing what they do and blessed to have taken the journey.