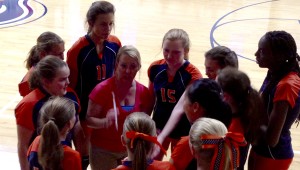 Head coach Tori Stone talks with members of the Charles Henderson Middle School volleyball team during a break in the action on Tuesday.
SUBMITTED PHOTO

The Trojans won their first game against the Goshen Eagles 25-5, but Stone said the girls’ second game against was much closer with just a two-point advantage for the Trojans over the Eagles.

“The second game was very close,” Stone said. “But we ended up winning it 26-24. I think they just realized what they needed to do. It’s like everything I’ve been telling them all season came together.”

Stone said her middle school girls played well, especially considering they played five games in one night and with such young players.

“My girls are all seventh- and eighth-graders,” Stone. “We really hit our serves well. We really just stepped up and did what we needed to. We all pulled it together and pulled out a win. Everybody played really well. It was a team effort.”

The CHMS Trojans will play at home next Monday, Sept. 22. The volleyball team will host a tri-tournament with a team from Barbour County and from Luverne. The tournament will begin at 4:30 p.m.