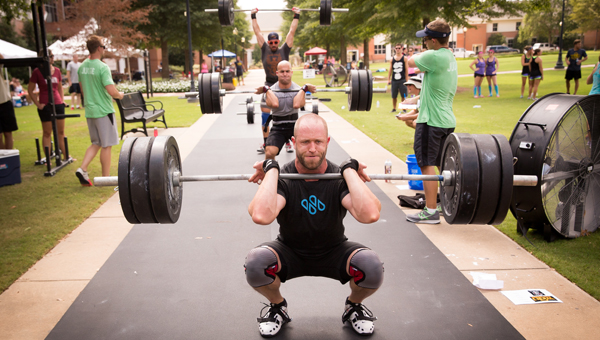 More than 100 people participated in the WOD for Water event on the Troy University campus Saturday morning. It was the largest number since the event began, say organizers. (Submitted Photo / Candace Nelson)

Weights, sweat and more than a little fun came together on Saturday as volunteers raised more than $59,000 to bring clean water to third world countries through the WOD for Water event.

The $50,000 set goal was exceeded, with the majority of the proceeds made up of donations and sponsorships from individuals who wanted to fund a well in the needed areas. More than $5,000 was raised through the workout or walk participation fees, Jones said.

The money raised will be spend to build 14 wells India, one well and three rain water tanks in Cambodia, one well and seven bio-sand filters in South Sudan. The projects will be carried out by the non-profit organization NeverThirst.

“If people want to continue to support the cause, they can go to our website and follow the donate button,” Jones said. “They can give any amount they want.”

The organization is also selling T-shirts to continue to push their total towards the $60,000 mark.

The proceeds will affect thousands of people who will have access to clean, safe water and hear the Gospel for the first time in their lives.

Jones said the high turnout of this year WOD is partially due to CrossFit Ilium’s sponsorship, organizing and creating the types of workout for the event.

“We can’t thank the community enough for the support they have for this cause,” Jones said.

“A tremendous number of people are getting involved one way or another. We cannot do this without the community.”

Jones has plans to review the impacts of WOD towards the cause.

“Myself and the two owners of CrossFit Ilium will be going to India in October to see some of the wells we built from last year and look for new areas to build new ones this year,” Jones said.

Organizers are thinking outside of the box to develop ideas to make the event better next year.

Brandon Gossett, NeverThirst director of development said the organization looks forward to sending the proceeds to the countries in need of clean water.

“We were truly humbled by the support shown by the Troy community for WOD 2014,” Gossett said.

“Every year this event has grown. We are excited to see what is in store for WOD 2015.”