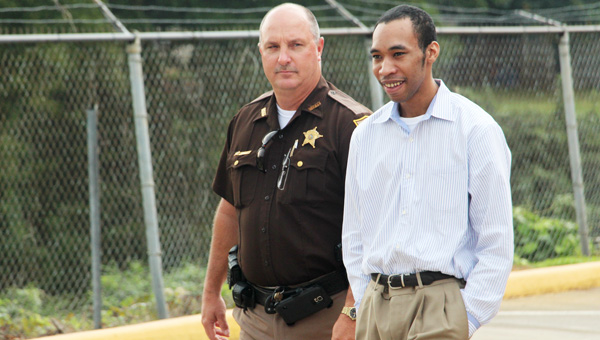 Ryles was originally charged with three counts of capital murder in the April 2011 deaths of Mark Adams and Carla Smilie.

Three others also were charged with capital murder in connection with the Needmore murders. Marquise McClaney and Troy McClaney both pleaded guilty to two counts of felony murder. John Foster had previously pleaded to two counts of felony murder under the stipulation he agreed to testify truthfully in any related matters to the case. Foster’s plea was revoked after Foster refused to testify in Marquise McClaney’s mid-August trial, and he now faces trial on three counts of capital murder.

Jurors heard closing arguments from the state and the defense before being released for deliberation. District Attorney Tom Anderson asked jurors to take a stand for Pike County when considering their deliberations, while defense attorney Gary Bradshaw asked jurors to look at the motives behind John Foster’s actions.

Anderson said the state intends to ask for the maximum sentence for each of the charges. “We intend to ask for two counts of life sentence,” he said. “Ryles faces life in each case and we want to ask for them to be served consecutively. If we are able to get maximum sentencing, we’ll be happy, as well as all of the family members affected by this case.”

Anderson said jurors had to decide if Ryles was guilty of capital or felony murder. “For a charge of capital murder they would have had to believed he caused the deaths or he intended that the deaths were caused during the course of a felony,” Anderson said. “He is being convicted of felony murder because he did engage in a dangerous felony, and their deaths happened during the commission of the felony. It doesn’t actually mean that he utilized in the weapons used in their deaths or intended on their deaths occurring.”

Anderson said he felt there was no doubt the jury believed Ryles had intentionally taken part in the crime.

“I think it was clear that at no point did it appear that the jury believed he was not intentionally involved in this conduct,” Anderson said. “Clearly, they thought he intended to engage in that robbery and the deaths of those individuals that occurred during that crime.”

Ryles will have a presentence investigation before his sentencing. Circuit Court Judge Shannon Clark said Ryles’ sentencing would be anywhere from 30 to 60 days from now.

“The only scenario when you don’t have a presentencing investigation is unless the defendant waived his right to one,” Anderson said. “A probation and parole officer will conduct their own background check on any other matters that might be material to the case. Mostly it’s their delving into his criminal history. They’ll meet with the individual and they will talk to them.”

Anderson said the state would like to thank the jurors as well as the Troy Police Department for their time and dedication during the investigation and trial.

“We also want to thank the jury for their time and dedication,” Anderson said. “They sent a strong message with their conviction. I wanted to thank them for not buying into Brandon Ryles’ falsification of the events of that night that would have let him off and for not letting him get away without punishment. I also want to commend Troy Police for their hard work. They put in tremendous hours of work at the beginning of this investigation, and they were thorough with everything.”