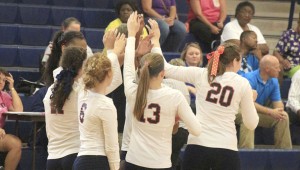 Charles Henderson volleyball team huddle together during a time out during their game against the Pike County Bulldogs.
MESSENGER PHOTO/APRIL GARON

The JV scores were 25-19 for both games. The varsity team scores were 25-12, 25-15 and 25-15. Charles Henderson head volleyball coach Jennifer Sikes said that while she had a few inexperienced players, they were all able to see the court and played well in their positions.

“They played very well,” Sikes said after the win Monday. “Everybody got playing time tonight, which I thought that was good. Wherever I stuck them they were able to answer the call. They are an inexperienced team. They don’t really have a starting six. This is their second win. We went to Luverne last week and won. They’ve got taste of winning, and I hope they keep it up.”

Lindsey Fox lead the team with 14 points, 12 aces and also had 10 digs for the game. Sikes was thankful for the win, saying she hoped the momentum would carry into the Trojans’ next game.

“They played very well tonight,” Sikes said. “This is our first win, and I think it was a good one for us. I think it will help them get a little momentum going.

Sikes said the Trojans had been working for area competition.

“They tried what we’ve been practicing and tried to get it perfected,” Sikes said. “We just worked on executing tonight. Our serves have been down a little bit, but they were much better tonight.”

While the Bulldogs lost Monday night, head volleyball coach for Pike County Shea Driggers said she was still proud of the effort her girls put into the match up.

“I feel like overall we did really well,” Driggers said. “We have a lot of things we still need to work on. I feel like every game we should find something to improve on, and if we don’t execute things right in the game then we can work on them in practice.”

Driggers acknowledged she had a younger team, but said she felt there was a lot of leadership potential in her older girls on and off the court.

“Shana Lee, no. 6, and No. 1 Laken Maulden, those are my leaders on the court. Every play they’re saying something. They are always moving. It’s never a second guess for me of whether they’re going to give 100 percent or not.”

Driggers said there were still things the team needed to work on in order to get better.

“We need to work on our teamwork on the court, our serve receive and getting the ball to our setter,” Driggers said. “Those are some may points that we work on every day at practice, and we’ll probably continue to work on them.”