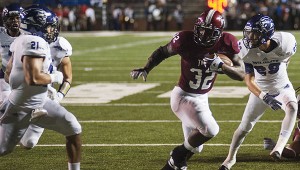 The Troy Trojans have struggled to find an identity within their program following a 0-2 start to the season, and after a 38-35 loss to Abilene Christian it seems they are still searching.

“I knew it was something that could happen,” said head coach for the Trojans Larry Blakeney. “We’re in the throes of a sad time here after losing a game to a team that everybody thinks we are supposed to beat. This team that beat us tonight can beat anyone in this league.”

For the first time this season the Trojans failed to score on their first drive of the game, allowing the Wildcats to claim the honor of an early 7-0 lead with a 12-yard touchdown pass from Wildcat quarterback Parker McKenzie.

It would take until the third Troy possession of the game before quarterback Brandon Silvers dove over several Wildcats defenders, finally landing in the end zone.

Silvers would go on to score again in the second quarter from one yard out of the end zone giving his team a 14-7 advantage.

Shortly after Abilene Christian’s next drive a pass from McKenzie would be intercepted by nickleback Femi Odaibo and brought back to the Wildcats’ 11 yard line. The play set up a connection from Silvers to Burks for the first passing touchdown for the Trojans this season. The score moved the Trojans lead to 21-7 lead at the half.

But, a 21-point lead for Troy would not be enough to stop the Wildcats in the second half.

The Wildcats began orchestrating their comeback by taking the first possession of the second half and moved the ball 77 yards in less than three minutes. The drive was capped off with a 3-yard touchdown by wide receiver Demarcus Thompson.

Troy would score just once in the third quarter. Khary Franklin had his first career-rushing touchdown giving his team a 28-14 cushion.

Three plays later a short pass to Abilene Christian’s Cedric Gilbert would develop into a 63-yard sprint down his team’s sideline to cut the Wildcats deficit down to just seven points with a score of 28-21. The Wildcats scored again after a three-play drive late in the quarter that would tie the game at 28 following a 47-yard rush by De’Andre Brown.

Silvers would go down in the middle of the third quarter for what later was explained as a concussion injury, leaving Dontreal Pruitt as the lone man to lead the Trojans for the remainder of the game. Silvers finished the game with 217 total yards and three touchdowns.

“I think Silvers played well,” Blakeney said. “I hope he’s alright where he can continue to compete, but he did a good job running the offense.”

Blakeney did not feel as though the Wildcats made any drastic changes at halftime despite the quick turnaround for Abilene Christian.

“I don’t think anything changed that much,” Blakeney said. “They were still running the same stuff. They had a couple of big plays, a long run. You can’t let a guy run through your defense for 70 yards and outrun everybody.”

In the fourth quarter the Trojans failed to execute on several key plays that would ultimately prevent the Trojans from an opportunity leave with the win. Including, a defensive pass interference call on 4-4 that ultimately ensured the first loss to a Division II team for Troy since they first moved up themselves in 2001.

“The whole group down there is frustrated, and our coaches are too,” Blakeney said. “I’m more frustrated than all of them put together.”

“I don’t know but one way,” Blakeney said. “That’s to lay your shoulder to the plow and get back to work, and try to get your players to do the same.”