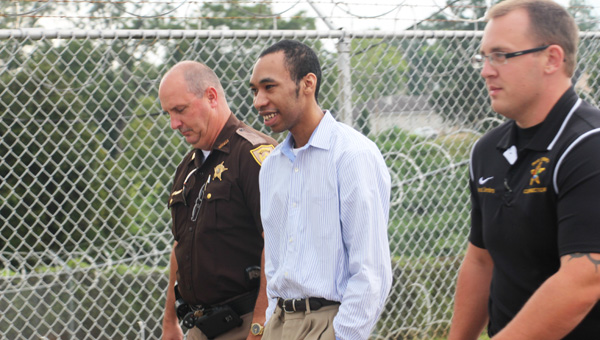 Brandon Ryles is one of four men charged with capital murder in connection with the April 2011 shooting deaths of Carla Smilie and Mark Adams. (Messenger Photo / April Garon)

A man charged with three counts of capital murder took the stand Friday afternoon in his own defense, contradicting his earlier statements to police and placing blame for the murders on one of his co-defendants.

Brandon Ryles is one of four men charged with capital murder in connection with the April 2011 shooting deaths of Carla Smilie and Mark Adams. Testimony began this week in his trial.

Marquise McClaney and cousin Troy McClaney previously pleaded guilty to two counts of felony murder and agreed to testify for the prosecution. John Foster, the fourth man charged with the murders, had previously reached a plea deal with the state for two counts of felony murder, but his plea was revoked following his refusal to testify in Marquise McClaney’s.

And it is Foster whom Ryles named as the man responsible for murdering Adams and Smilie.

“(Foster) came to talk to Marquise and Troy” on April 4, 2011, Ryles testified Friday. “After he talked to them for a little while, he asked Marquise to ask me to take him to Troy for some marijuana.”

Ryles testified that the men traveled to Northside projects in Troy, where Foster procured marijuana and cigars to make blunts to smoke.

“Marquise and John got the cigars,” Ryles said. “It was actually John (who cut open the cigars). He used my knife. It actually came from the center console of my truck.”

That knife and a gun belonging to Foster have been identified as weapons used in the murders.

Ryles testified the four eventually left the residence and drove around for a while before Ryles needed to get gas.

“John, he was supposed to give me gas money, and I didn’t want to have to pay for it,” Ryles said. “So, I asked him and he didn’t have it. So Marquise called his dad for some money.”

Ryles testified that after leaving the gas station, his mother called warning the storm was going to be bad, but Foster changed the plans. “John asked Marquise to ask me to take him to his homeboy’s house to get some money that he owed him,” Ryles said.

Foster directed Ryles out to Adams’ home on Needmore Road. “All I can remember is he said turn left at the caution light and go straight until he said to turn again,” Ryles said.

Upon arriving to the residence, Ryles testified someone came to the door and the only thing he saw was “the porch light reflecting off the clip of the weapon.” Ryles testified further that Foster got out of the car alone.

In his statement to Troy Police Detective Sonny Schreiber, Ryles had said Foster went into the house alone and after hearing a gunshot the other three men left the vehicle and went into the residence. However, Ryles retracted that statement on Friday.

“Troy was asleep, and Marquise and I were listening to music and smoking weed,” he said, saying the three never left the vehicle. He said Foster was alone in the residence for 20 to 25 minutes. “When he came back, he came back with a stack of guns,” Ryles said. “He had them with one arm. We didn’t see them until he opened the door.”

Ryles testified saying Marquise had asked Foster what he was doing with the firearms, and Foster responded that Adams had not had his money so he gave him the guns for his collateral.

Foster ultimately put the guns in the back of the Jeep Grand Cherokee that Ryles was driving and the four left. The vehicle soon hit a downed limb, damaging two tiers, and as the men were attempting to repair the vehicle Ryles said Foster began to lay the firearms in a ditch on the side of the road.

“He took the guns out of the back of the truck, and put them on the side of the road,” Ryles said. “He said he was on probation and he wasn’t allowed to be around any guns and I was about to calls the cops.”

Ryles never called the cops to notify them of the downed limb, not even after discovering the knife and shotgun his grandfather had given him were missing from his truck the next day.

Ryles told district attorney Tom Anderson that he was afraid of what his mother would say upon discovering he had lost the knife and shotgun. Ryles also told defense attorney Gary Bradshaw he was afraid of how Foster would react if he found out.

“He was bowed enough to kill two white people in south Alabama,” Ryles said. “I wasn’t going to say nothing.”

Ryles’ testimony on Friday contradicted his earlier statement to law enforcement officers and statements made by other defendants, including Marquise McLaney who directly placed Ryles on the scene and accused him of committing the crime.

Ryles told Anderson he was just making a statement at the time of his questioning by Schreiber and was not testifying. Ryles said he had not been placed under oath before making the statement. “That was false,” Ryles said. “The whole statement.”

Schreiber spoke to Ryles twice before Ryles gave him a statement on the third attempt. Ryles said Friday his statement to Schreiber was not accurate and that he had lied in order to go home that night.

“There was a lot said,” Ryles said. “He was not going to let me go home unless I gave him some information. He told me he goes home every night, and it was up to me if I went home or not.”

The defense rested Friday afternoon. Closing statements from both the state and defense Monday morning will be presented, as well as any matters pertaining to case. The trial will continue Monday morning at 9 in Courtroom B of the Pike County Courthouse.