Trojans take winning record on the road to Auburn 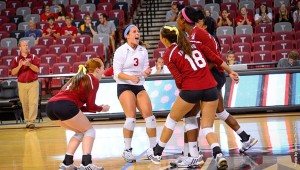 The Troy University volleyball team takes its winning record on the road this weekend to face Auburn. The team is on a five-game winning streak.
PHOTO/TROY ATHLETICS

The Troy volleyball team takes a five-match winning streak to Auburn this weekend as the Trojans get set for three matches at the Active Ankle Challenge, hosted at Auburn Arena.

Troy will take on Auburn at 7 p.m. on Friday. The Trojans will then play South Florida and Winthrop at 9:30 a.m. and 5 p.m., respectively, on Saturday. Live stats for all three matches can be found on the volleyball schedule page at TroyTrojans.com.

Troy (8-1) is off to the best start in the program’s Division I history (1993-present) and has won five straight matches, including a road sweep at Alabama State on Tuesday. The Trojans lone loss was a close four-set defeat at Clemson during the season’s opening weekend.

The Trojans, who have the third best attack percentage in the Sun Belt at .259, are led by Blair Winston who averages 3.37 kills/set. Winston was the MVP of last weekend’s Trojan Invitational and has posted double-digit kills in seven straight matches.

Tineille Waggoner is setting up the Troy offense and is averaging 9.96 assists/set, the fourth best mark in the Sun Belt.

Defensively, Troy is second in the Sun Belt in blocking, with Darby Griff leading the way at 1.10 blocks/set. Griff has a team-high 33 blocks with Kiah Cheatham just behind at 32 (0.97 blocks/set).

Ali Dowdall leads Troy at 3.52 digs/set and helps the Trojans hold opponents to a .157 attack percentage, the fourth best mark in the Sun Belt.

Auburn (3-3) is coming off of 1-2 showing at the Sports Imports D.C. Koehl Classic, hosted by Ohio State, last weekend. The Tigers defeated Florida Gulf Coast but were swept by the Buckeyes and Southern Illinois. Troy is 0-7 all-time against Auburn, including a four-set loss in Auburn last season.