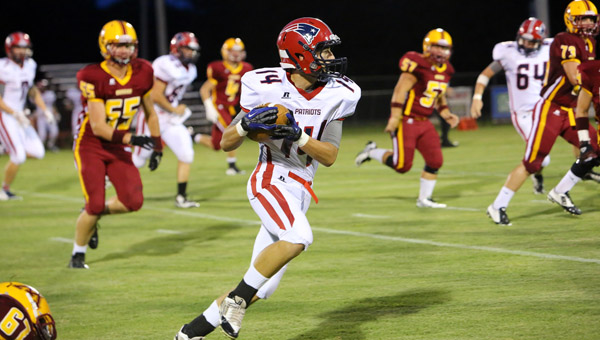 Two lightning delays stopped the game at different points — once in the opening quarter and one with 2:42 left to play — but even Mother Nature couldn’t slow the Patriots, who rolled to a big region win.

“It’s a big win for us because it puts us 2-1 in the district,” said Pike Liberal Arts head coach Gene Allen. “That’s one of our goals to get into the playoffs, but we had to overcome a lot because the weather was tough and we lost our quarterback in the middle of the third quarter. We had to do a lot of things we didn’t plan on doing.”

Pike’s Marquese Christian started the scoring with a 12-yard touchdown reception with 6:33 remaining in the first quarter.

The rain slowed the offenses for a while, but Pike eventually extended its lead with a Rush Hixon 5-yard touchdown run with 4:55 remaining in the third quarter.

Just when it looked like the Patriots may run away with a big win, Morgan Academy found some life on a 40-yard fumble return for a touchdown by Tyler Bush to pull within 12-7. Unfortunately for the Senators, that was as close as they would get all

The Patriots finally pulled away from the Senators with 8:45 remaining in the fourth quarter on a Hixon touchdown run, making the score 20-7.

Leading up to the game, Allen said he wanted his Patriots to be able to protect the ball better and work on the communication on the line after missed tackles in the Monroe game. After the team’s second-district win, Allen said the hard work put in at practice was paying off for the Patriots.

“Defense played well,” Allen said. “We still put the ball on the ground. We had several, three or four, fumbles. The weather just made it where you dropped the snap. We actually ran the ball really well in the second half. We just decided we were going to come out and run power football and keep the game moving.”

Tyler Hussey led the team in tackles, Allen said. Scoring two of the four touchdowns were made by Rush Hixon. Adam Grice and Marquese Christian both scored once for the Patriots. Parker Eley had two interceptions for the team, Allen said. Overall, Allen said it was nice to see progress in his team.

“It means a lot, because that’s one thing we’ve been trying to work on,” Allen said.

“Last year, we gave up a lot of points.”

“This is a tough loss,” said Morgan Academy head coach Jake Wingo. “This game had a lot of playoff implications. Our guys fought but we missed too many tackles on defense and on offense we played behind the chains. We had too many penalties on first down that set us back.”

Morgan added a late touchdown by Jackson Henderson to pull within 27-13, but then lightning delayed the game for a second time.

Although it was after 10:30 p.m., the teams elected to wait it out and eventually finished the contest.

Wingo said the Senators just made too many mistakes on this night, with penalties being the main culprit.

He said his team was behind the chains many times and with the weather causing havoc, it made things even harder on the Senators’ offense.

“When it is pouring down rain the passing game is going to be pretty ineffective and the way our offense is set up, we are 4-yards, 4-yards, 4-yards so yes it did [affect us],” Wingo said. 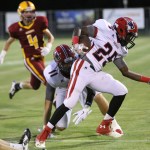 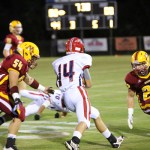 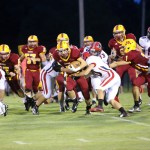