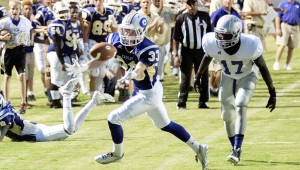 Goshen wide receiver Kaleb Spear reaches for a pass as his team looks on behind him. Goshen will travel to New Brockton to face the Gamecocks Friday.
MESSENGER PHOTO/JOEY MEREDITH

Following a close 21-20 victory over the Luverne Tigers to open regional play the Goshen Eagles are preparing to face a similar match up this Friday as the team travels to New Brockton to face the Gamecocks.

According to Eagles head coach Bart Snyder, the key difference from a week one loss to Pike County and the win over Luverne was the mentality of his players.

“They’re just continuing to play as a team,” Snyder said. “They are working together. We’re still really young, so our older guys are leading those younger guys to do the right thing and showing them how to play and in position.”

New Brockton plays a different style of football than the Tigers, but remain a talented team offensively and defensivley.

“It’s pretty much the same thing we’ve done for the past several weeks,” Snyder said “They have a very athletic quarterback, a very big offensive line, and are very disciplined defensively.”

The Gamecocks sit undefeated at the top of Region 3 in the 2A Class averaging 54.5 points a game, the most recent game being a 60-14 dismantling of the Calhoun Tigers.

Snyder expects New Brockton to run the ball more than what then Eagles have seen so far this year, but nothing that his team connot handle as long as they remain focused.

“We’ve got to be disciplined and execute, and it’s got to be a team effort,” Snyder said. “We can’t look at anybody else, just because we beat a good Luverne football team and kept Pike County to 12 points doesn’t mean that these other teams we play without as much notoriety aren’t better than they are.”

Leading the charge for the New Brockton Gamecocks will be quarterback Payton Carter. Carter finished the win over Calhoun with 139 rushing yards and another 110 yards passing. Carter also finished the game with a total of five touchdowns for the Gamecocks.

Snyder expects the Eagles to give themselves a chance to win the game, but knows that it will be no easy task for the team to leave New Brockton with a victory.

“Last week was really huge to start off 1-0 in the region,” Snyder said. “A win this week would be even better, but we’ve got a lot of work to do to be able to get that win.”