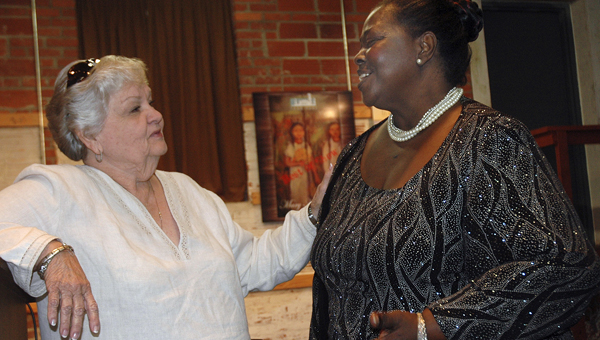 Messenger Photo / Jaine Treadwell
Marilyn Jones Stamps, semi-retired publications manager for the Alabama Department of Tourism, was the guest speaker at the Female Factor at The Studio in Troy Wednesday. Following the program, Stamps, right, shared stay-cation locations with, Eulane Jones and other members of the audience.

The packed audience applauded it.

“Sweet home, Alabama” was the main topic at the Female Factor Wednesday at The Studio in downtown Troy.

Stamps, a semi-retired publications manager for the Alabama Department of Tourism and 2012 Employee of the Year, was the guest speaker. And, Stamps did what she does best, cheer for the home state.

With 30 years experience with the state tourism department, Stamps knows Alabama like the back of her hand. She now takes advantage of every opportunity to share her stories about “Sweet Home, Alabama” and to encourage residents to take “stay-cations” and see what all Alabama has to offer.

“When the Alabama Department of Tourism wrote its bylaws, it mandated that the department could not advertise within the state,” Stamps said. “That makes it rather difficult to let residents know what we have right here in our own backyard.

“With the downturn in the economy, fewer of our residents were traveling outside the state so it became even more important to let Alabama residents know what all Alabama has to offer.”

The Tourism Department found a way to highlight Alabama through its “Year of …” promotions.

In 2004, the tourism department unveiled its statewide promotion, “The Year of the Garden.”

“The idea behind the promotion was that you could go to Callaway Gardens in Georgia but why not go to the beautiful Bellingrath Gardens or Jasmine Hills Gardens right here at home,” Stamps said.

“The Year of the Garden” was an incentive for people to see Alabama first and the “Year of … ” became an annual promotion.

“We’ve had the ‘Year of’ the Great Outdoors, Alabama Art, Alabama Sports, History, Small Towns/Downtowns among others but the Year of Food in 2005 really took off so we had it back in 2012,” Stamps said. “The brochure, ‘100 dishes to eat in Alabama before you die’ received a huge response and is still very popular. People continue to use it as a guide to great places to eat when they travel around the state.”

Locally, Mossy Grove, Sisters and Crowe’s in Troy are included in the brochure.

Stamps, laughingly, said, in writing about “100 dishes” a reporter for the Atlanta Constitution quipped that he didn’t know there were 100 ways to cook road kill.

“We took that as an insult and invited him try our 100 dishes,” she said.

The reporter agreed and ate his way from North Alabama to the Gulf Coast.

“He said people of Alabama couldn’t count either because there were at least 200 Alabama dishes to die for,” Stamps said.

Alabama’s next promotion will be the “Year of Barbecue” and it should be extremely popular, too, Stamps said.

Troy Tourism Director Shelia Jackson told the all-female audience that Troy and Pike County should also be considered as stay-cation destinations for travelers around the state.

“And, we also should look in our own backyard for entertainment,” she said. “We have a variety of entertainment events offered by the Troy Arts Council, the Johnson Center for the Arts, the Pioneer Museum of Alabama, the Troy Recreation Department and Troy University and the We Piddle Around Theater and Studio 116 in Brundidge,” she said. “There’s no place like home and Troy and Pike County are great places to call home … and for stay-cations.”