CHHS readies for region rival Greenville, looks to ‘new guys’ to stand out on field 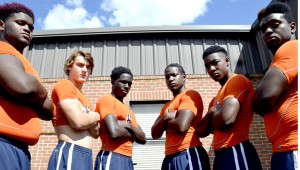 The Trojans and Tigers have a rich tradition spanning many decades on the gridiron, and in the last two meetings only one point has separated the winner from the loser each year.

Greenville, under first year head coach Patrick Plott, is 1-1 following a 7-6 overtime setback to open the season on the road at Valley, but returned home to trounce Booker T. Washington 58-14.

CHHS Head Coach Brad McCoy says this week’s preparation is opposite of the Dale County plan, due to Greenville’s passing strengths.

“Coach Plott comes from Pickens County where he had a lot of success,” said McCoy. “With his teams, they are always very athletic. They throw the ball a lot and love to spread it out. The thing is, Greenville over the years has always been a very athletic team with a lot of good players, and now Coach Plott has brought in a lot of excitement. Those kids I am sure are really liking playing for him.”

McCoy points out that Greenville has an experienced nucleus, with 17 seniors on their roster, while the Trojans have basically nine new faces on offense and eight on defense.

Greenville will be led by senior quarterback Draylen Mcgrew and three receivers that are pushing 6-foot-4.

“They are very athletic and catch the ball well,” said Coach McCoy. “They are very senior laden, including all the wide outs, the quarterback, the running back, three of the linemen – they are chock full of seniors making play after play.”

Following Friday’s 34-17 loss at Dale County, the Trojans shifted their focus immediately to the Greenville Tigers upon returning to practice.

“We have really had to switch gears,” said McCoy. “What we are going to see this Friday night is a 180-degree turn from what we saw last Friday night. We were having to prepare for a fullback, tailback and a big offensive line in Dale County, and in Greenville, we will have to defend the pass a lot more than the run.

“I am not saying they will not run because they do run the ball well. But our mindset going into this game is trying to make sure we have a front and coverage package set up to defend them. They are not a big football team on defense, but again, they are very fast, they change direction well, run to the ball well, and this is really a totally different mindset than what we had to get ready for a week ago.”

McCoy said he has seen many positives, as well as areas for improvement.

“One thing that comes to mind is all the new guys that stand out,” said McCoy. “We roughly have nine new guys on offense and eight new guys on defense. Going through those first two weeks, we have seen a tremendous amount of improvement. I like our guys effort, their energy, each and every week. We have a demanding schedule, not just our game schedule but practice schedule. I think for the most part, 98-percent of them come to work every day very early to put in the time and effort, not to mention the weekend work .

“I like our mindset, and I like where we are going, even though after that defeat Friday night I like the way we responded Sunday afternoon when we came in. I like where we are going. We look forward to this game, we know it is going to be a big one. The last two years have been decided by one point each year. The kids understand it is a big ballgame, one because it’s the next game, two because it’s our first region game, and three because we are playing at home. So we’ve got a lot of things in our favor, we just have to execute and go act on them now.”