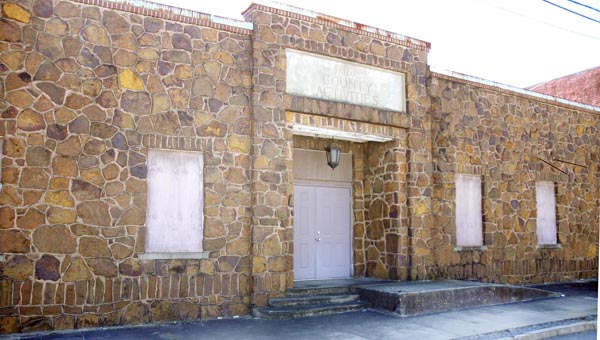 Messenger Photo / file
Grassroots efforts to save the Rock Building received a vote of confidence from county commissioners on Monday as they decided to set aside $50,000 for the effort in the 2015 budget.

The grassroots fundraising efforts to restore the Rock Building in Troy for use by all people of Pike County got a big boost from the Pike County Commission on Monday.

At the commission’s budget hearing, commissioners agreed to designate $50,000 in capital improvement funds in the proposed 2015 budget toward the Rock Building restoration project.

Commissioner Robin Sullivan said if the commissioners were serious about their support of the project, it was time to make a commitment to it.

David Helms, who is spearheading the efforts to restore the Rock Building, attended the budget hearing and expressed to the commissioners the importance of preserving a piece of Pike County that is historic in structure and was the center for county activities for several generations. The building was a 1939 WPA project and was constructed using field rocks collected from every corner of the county. The work was done by local people who desperately needed and wanted to work.

“This initial pledge by the Pike County Commissions is certainly a tremendous boost to our fundraising efforts,” Helms said. “I got the message the commissioners are committed to the project and to seeing it through. I came away from the budget hearing feeling very positive about the future of the project.

“Going in, the committee members knew that we weren’t going to be able to raise the money overnight. I feel like now we can shift into second gear and move ahead with confidence that the restoration of the Rock Building is going to happen.”

Helms said hopes are the commitment to the project by the commission will kick-start other donations.

“The county commission gave the fundraising efforts a vote of confidence,” Helms said. “And the money they committed will come from the capital improvement fund and will not take money away from road projects or any other county projects.”

Helms said his hope is that now people will realize now the restoration of the Rock Building is not just a hope and dream.

The “Save the Rock Building” steering committee is continuing its efforts to find funding sources for the restoration project.

“The committee is exploring grant opportunities and ways to raise funds locally,” Helms said. “We aren’t going to try to sell cupcakes on the corner. We need to have events that will bring in more than a few dollars. Right now, we are working toward an outdoor concert that would attract a wide range of people. But that won’t happen until sometime in the spring.”

In the meantime, Helms said the fundraising efforts will be directed toward donations to “the Rock.”

“Those who want to ‘Save the Rock’ are encouraged to make a $10 donation to the Rock Building fund and receive a commemorative card in recognition of their donation,” he said. “Right now, we have about 700 people who have donated more than $13,000 to saving the Rock. With the commitment from the Pike County Commission that will take us to more than $63,000 and that’s a good start. We want to keep the momentum going so we encourage everyone to get involved with saving the Rock.”

Donations to the Rock Building Fund may be made at Home Gallery or at the Pike County Chamber of Commerce both in downtown Troy and at Mobley Business Service in downtown Brundidge.