‘No quit’ for Trojans in Dale County loss 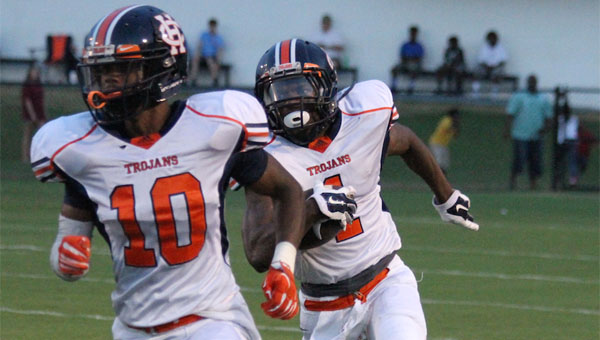 MIDLAND CITY, – Coupled with a four-touchdown, 253-yard rushing performance by Dale County running back Jamarius Henderson and an endless night of big plays negated by penalties, Charles Henderson High of Troy dropped a 38-20 contest to the Warriors Friday in Midland City.

Both teams fought to a scoreless first quarter, but the Warriors claimed a 7-0 lead when quarterback Trey McMillian ran 52 yards for the touchdown, capping a 64-yard drive.

The Trojans of Charles Henderson tied the game at 7-7 with 3:03 left in the first half on an 80-yard drive as Mondaris Dixon busted a 30-yard run, and Ben Salmon’s extra point was good.

Dale County took the ensuing kickoff and took a 13-7 lead with Henderson carrying the ball four times for most of the yardage including a 5-yard scamper on the touchdown carry with 32 seconds left in the first half. The extra point was no good.

Warrior running back Henderson took a handoff to open the second half and ended up at the CHHS six yard line, and two plays later scored from three yards away for the 19-7 lead as the two-point attempt was not successful.

Lighting then forced a 40-minute delay, with 10:58 remaining in the third quarter.

Dale County went ahead 26-7 with 5:47 left in the third quarter as Warrior quarterback McMillian threw a 41-yard pass to Ryan Barbour for the score, and the extra point kick was good.

The Trojans refused to let the drive die, however, as quarterback Austin Ingram completed a pass to Riley Fox to the five yard line, and then lofted a touchdown pass to Jalante Smith for the touchdown, and Salmon’s extra point cut the score to 26-14 with 3:49 remaining in the third quarter.

Dale County’s Henderson scored his third TD of the game on a four-yard carry to open the fourth quarter, giving the Warriors a 32-14 lead.

Ingram and Dixon drove the Trojans down for another score with 6:22 remaining in the game, with Ingram first throwing a 15-yard TD to Smith, but a flag took the points off the board. However, on fourth and long at the Dale County 27, Ingram went back to Smith, who again leaped high over the defender for the catch and the touchdown.

The Trojans went for two points but were not successful.

An onsides kick was recovered by the Warriors at midfield, and Henderson scored his fourth touchdown of the evening on a two-yard scamper for the 38-20 lead, as the PAT failed with 3:03 left in the game.

The Trojans got the ball late in the fourth quarter but were unable to put together a drive.

CHHS head coach Brad McCoy knew Dale County was going to be motivated for this contest, and the running of Henderson coupled with the abundance of penalties dealt the Trojans their first defeat this season.

“As a football team, we knew coming into the season and this game we had a lot of unknowns,” McCoy said following the game. “We saw two films on Dale County from their first two games this season, but we knew they would give us everything in their playbook that they had not run this season, and they did.

“We’ve got to do a better job of adjusting. But I was proud of our team because there was absolutely no quit. Our guys fought to the end. Coach (Dale) Harrison and his staff had a great game plan and they just had more motivation than we did. We did not play our best football, but we are going to work first thing in the morning, and we are going to get better.”

Harrison had high praise for McCoy as well as the upcoming area clash against Pike County High. “Brad (McCoy) has a great work ethic and team, but our guys were super fired up,” he said. “A big play here or there was the difference in the game. We have a big matchup against Pike County high, and we know that will be a great game also.”

Dale County improves to 2-0 on the year while CHHS is 1-1. The Trojans of CHHS will play at home next Friday against Greenville in Veteran’s Memorial Stadium.