Eagles give their all to defeat Luverne, 21-20 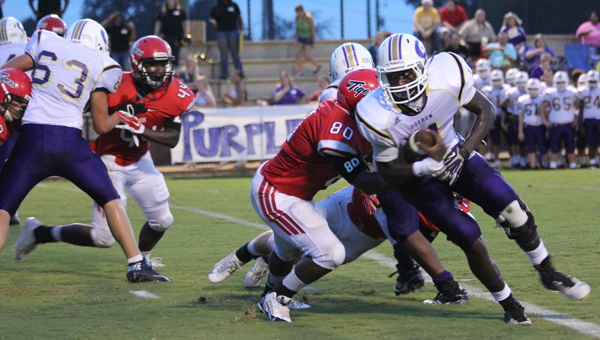 Head coach Bart Snyder said his Goshen players left everything on the field in Luverne on Friday as they defeated the Tigers 21-20.

“This is very exciting to win,” Snyder said. “It’s great to be 1-0 in our conference this season. We’ve got a long way to go. This is just game number two, but we’re looking forward to the season. We’re blessed for the fans that we have, and the people who stand with us.”

Snyder said ninth-grader Zack Alford stepped up and made plays when the team really needed them.

“We had Zack make a good catch, and some good runs,” Snyder said. “He just played a great game.”

But Snyder said the win was a team effort and that several players had stepped up to fill their roles.

“When it come to it, Zack made the plays when we needed them, but we had so many people step up and make the plays,” Snyder said. “This was a hardworking team tonight.”

Middle linebacker and fullback for the Eagles Tyler Phillips led the team with 11 tackles, three assists and a fumble recovery.

Snyder said the team is young, and a 30-minute lightning delay gave the players a chance to catch their breath and regroup.

“We’re young,” Snyder said. “We’re very inexperienced ball team. That 30 minutes right there we came back out a different ball team. They came back with experience. The QB making great plays and making good throws.

Snyder said the coaching staff preached to the players to remain positive in everything they do, and said he felt that was evident in Friday’s win.

“We preach at the boys to the right thing, do the right thing,” Snyder said. “We tell them that you have to play for the positive and look for positive for everything we do. If you let positive come in good things will happen.”

The Eagles will travel to New Brockton next Friday to face the Gamecocks in Gamecock Stadium at 7 p.m.