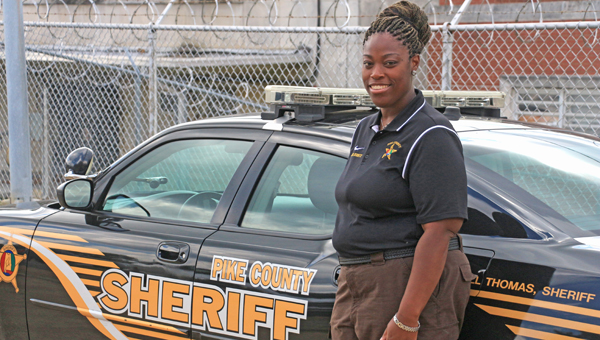 Andrea Degenett with stands with one of the Sheriff Department patrol cars. Thursday was her last day working with the Sheriff’s Department after seven years. Degenett will be moving to Birmingham to work with the Social Security Administration.
MESSENGER PHOTO/APRIL GARON

Though Andrea Degenett is sad to leave her position at the Pike County Sheriff’s office, she said she excited to see what lies ahead.

Degenett has served the sheriff’s office for over seven years. She is a jailer at the Pike County Jail but said she has gained experience in all facets of criminal justice while working for the department. Thursday was her last day working at the department as she prepares to move to Birmingham to work as a benefits authorizer for the Social Security Administration.

Though she loves the small-town atmosphere of her hometown, she said she is ready to turn a new page and try living in the big city.

“I’m a small-town girl,” Degenett said. “But I am excited about a change to try to do something different.”

Degenett’s position at the sheriff department involves many responsibilities, from dealing with inmates, to taking emergency calls and dispatching deputies. She said working for the department was great hands-on experience while she worked toward master’s degrees in criminal science and public administration at Troy University.

Since she was a small girl, Degenett has had the ambition of one day becoming an investigator. Her move to Birmingham is one step closer in that direction.

“I would watch crime shows with my grandmother when I was a kid,” Degenett said. “I always wanted to be an investigator. I’d one day like to become and investigator in the fraud department at the Social Security Administration by promotion.”

Seeing former inmates at the jail doing well is part of her job that Degenett said makes her proud.

“To go back now and see them doing well, it’s great to see one out that’s doing good,” Degenett said.

Experiences with meeting former inmates have almost always been positive, says Degenett. She said she treats them with respect and always keeps that in the back of her mind.

“I treat them like I would treat my children,” Degenett said. “I’m stern, strict, to the point, fair and want what’s best for them. I hope that’s how I always am — meaning what I say, saying what I mean and being fair to people.”