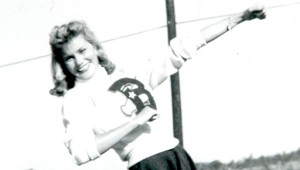 A younger Outlaw poses in her cheer uniform for Pike County. Outlaw reflected on her time spent as a Pike County High School cheerleader during the 1950s.
SUBMITTED PHOTO

That’s not a cheer that will be yelled at any high school football games these Friday nights. However, Juanita Richards (Skeeter) Outlaw said that’s the kind of cheer that got football fans on their collective feet and rallied the troops when she was head cheerleader at Pike County High School. She did not say the year.

“Back then, cheerleaders led cheers and got the crowd into the game,” Outlaw said. “Nowadays, cheerleaders look more like gymnasts and they wear cute, little uniforms. We wore wool skirts and wool sweaters and white tennis shoes. But, we didn’t get all that hot because we didn’t start to school until after Labor Day. The boys started practicing football after we started school and didn’t play a game until about October. It was cool then – most of the time.”

“Everybody would stand up and holler as loud as they could and folks could hear us all the way to the Tarentum,” Outlaw said, laughing. “We had a fight song and everybody knew all the words – grownups and little children, too. I don’t know if high schools have fight songs anymore, but they should.”

Even after “all these years,” Outlaw remembers the Pike County High School Fight Song.

“When all the team joins in and falls in line. We’re going to fight to win this game another time. We’re going to shout and shout for victory and let our name go down in history. The results will always be the same. In the end you’ll hear the name Pike County High School!”

At halftime, the PCHS cheerleaders would cross the field, take the visiting team’s cheerleads by their hands and take them to the Brundidge side for Cokes and chips.

Outlaw said the halftime show was always a thriller. The band from each school would take the field, in turn.

“Our band would turn to our side and form the letter ‘B’ and play a march and a patriotic song,” Outlaw said. “Then, they would go over and play for the other team’s fans and their band would do the same thing. Nowadays, the bands just play to the home side. To me, that seems kind of impolite. But we wanted to be nice to the visiting team even if we wanted to beat the fire out of them.”

Outlaw said the best part of the football game was when the final seconds ticked off the clock.

“The cheerleaders got to run out in the middle of the field and hug the football players,” Outlaw said, laughing. “It didn’t matter if we won or lost, we still hugged the football players. If Brundidge lost, some of the players would be so mad they would fuss and kick but most of us just hugged.”

After the football game, the cheerleaders would be in charge of the dance in the auditorium. As the head cheerleader, Outlaw’s responsibility was to get the records to be played. That meant going around the neighborhood and borrowing records.

“All of the girls were crazy about Elvis Presley,” Outlaw said. “Anything he sang we liked. And, we liked Fats Domino and The Supremes, the Coasters and Little Richard. Some of the boys liked to dance but most of them just stood around.

“But those of us that danced, danced up a storm,” Outlaw said. “We did the Bop and the Twist and some rock ’n roll stuff. We ever waltzed. We did.”

For Outlaw and others who experienced high school football in the 1950s, those Friday nights are deeply engrained in their memories. And, Outlaw said it would be fun to once again put on her letter sweater and her purple wool skirt and lead the fight song at her alma mater, Pike County High School.