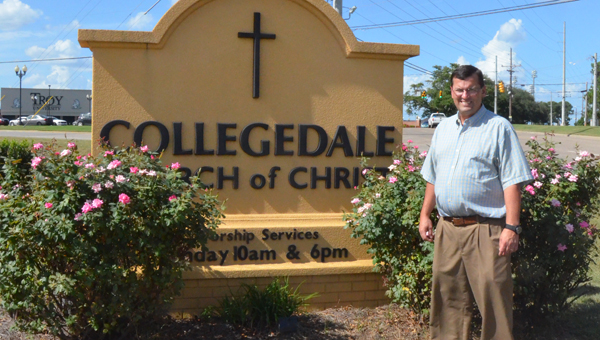 Messenger Photo/ Ngoc Vo
Bobby Templin is the minister at Collegedale Church of Christ, which is celebrating it’s 40th anniversary.

After 40 years in service, Collegedale Church of Christ is celebrating its anniversary this weekend with eyes on the past and the future.

Bobby Templin, Collegedale Church full-time minister, said this will be a spiritually uplifting weekend for former church members and former involved Troy University students to return to town. Past ministers including George Merritt, Robert Shelton, Jerry Culbertson, Larry Sawyer and Paul Clements will be the speakers at the event, Templin said.

Hubert Conner, one of the elders for Collegedale Church said the church has grown tremendously and they are expecting around 400 attendees for the anniversary celebration.

Collegedale Church’s 2014 theme is “A year of Renewal.”

“We want to celebrate the past and we also want to renew for the future,” Templin said.

According to Templin, since the church was built in August 1974, the number of members has grown from around 80 to approximately 240. The church has opened new facilities with the Christian Student Center (CSC) and the Collegedale Christian School for daycare and preschool level.

“Our mission, which is ‘Striving to be Christ’s ambassadors’ hasn’t changed,” Templin said. “We still have outreach towards college students. We are truly striving to carry out the mission in Troy community… we believe God still has great things in store for Collegedale in the future.”

There are approximately 50 college students attending the church regularly, according to Templin.

“Our main emphasis is on the students,” said Conner. “If we can convert (the students), we can spread all over the country and the world.”

Templin said the church has financially supported missions to various locations from Portland, Oregon to Honduras in Central America. Last summer one mission group visited an orphanage in Malawi, Africa.

“Collegedale is a special place to me,” said Danny Barron, a member of Collegedale since he was a small child.

Barron said he was raised in the church. He met his wife at CSC while he was a student at Troy University.