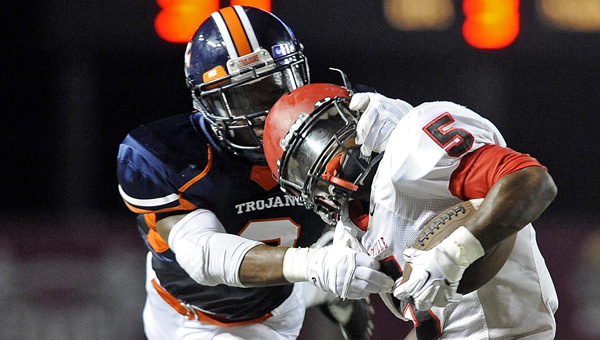 McCoy, Trojans prepare for ‘major test’ from 3A Dale County

He hopes he won’t see the Dale County running back racing down his sideline Friday night.

Charles Henderson travels to Midland City Friday night to tangle with the 3A Warriors, and their top chief, All-State rusher Jamarius Henderson. Henderson ran for 2,294 yards and 34 touchdowns in 12 games last season en route to being named 3A Back of the Year by the Alabama Sports Writers Association.

McCoy’s Daleville team lost to Henderson and the Warriors 20-0 last year, and he knows how important fundamentals are when trying to corral the FBS-bound running back.

“You have to put eight or nine guys in the box, fill the right gaps and wrap up and tackle like it is nobody’s business,” said McCoy. “I have seen Henderson play for four years. He was good as a freshman and he is great now. Schemes really are the answer to stop him. Once he gets the ball in his hands, we have to fly to the football, hit him hard and wrap up and get him to the ground.”

With Henderson’s physical running style, McCoy and the coaching staff have placed extra emphasis on tackling this week.

The Trojans work a tackling circuit each day in practice, and McCoy said this week is no different.

“We do tackling work every single day,” McCoy said. “From Pike County to Daleville, we got a little bit better. We have to be able to run and react to anything they give us.”

While the focal point of the Warrior offense is, and always will be, Henderson, Dale County does possess other weapons.

The one-two punch of McMillan and Henderson, along with other skill players makes Dale County a legitimate 3A state title contender.

“It’s not just Henderson, McCoy said. “They have a great quarterback who can make things happen with his feet and his arm. They have a big tight end that they like to through to, and a fullback that they sneak out in to the flat and other places. They run the ball so well, and that is what makes the play action pass so effective. Coach (Pate) Harrison and his staff do a phenomenal job down there. We are in for a major test.”

Charles Henderson is ranked fifth in 5A, while Dale County is seeded fourth in 3A.

Kickoff is set for 7 P.m. from Warrior Stadium in Midland City.

“We are still searching for this team’s identity,” said McCoy. “Last year’s team’s identity is sealed and put on the shelf. We will know a lot more about ours after Dale County. Good or bad, we will know what we are all about come about 10:30 p.m. Friday night.”

We have laughed, cheered and cried together; Thank you,…