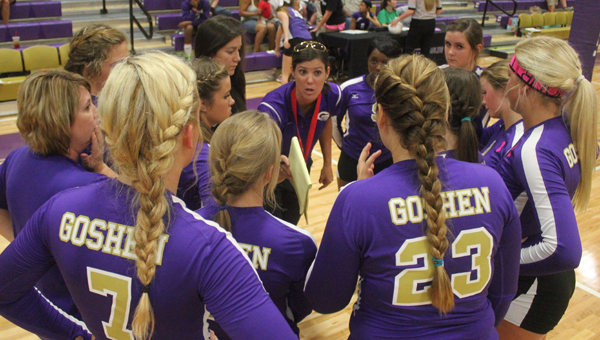 Goshen head coach Amy Warrick wasn’t pleased with how her team won, but will take the win any day.

The Lady Eagles downed Brantley in straight sets 26-24, 25-16 and 25-19. Despite the sweep, Warrick said her team still has quite a bit of work to do to become as good as it can be.

“We get so wrapped up in trying to score on offense, that we sometimes forget we have to play defense,” Warrick said. “I saw last week that we needed to move more on defense, and I head to fire them up some between the second and third set. I liked the way they responded and moved better in the third.”

Thomas and Allen have developed in to a dominant paring at the net, and Brantley worked a three-blocker defense in order to limit the power of the free-swinging Eagles.

Warrick feels Allen and Thomas are beginning to understand that not every set has to be spiked.

“We are still learning how to mix up the hits and the dinks,” Warrick said. “They want to hammer it home every time, but sometimes the court is open for a dink. We have to learn to recognize it in the air and make that adjustment.”

With the win, Goshen moves to 2-0 on the young season. The Lady Eagles started the season with a big 3-2 win over their rivals, the Zion Chapel Lady Rebels, last Thursday.

Goshen will welcome in the Charles Henderson Lady Trojans Thursday. A fast start early in the season is vital for Goshen, Warrick says.

“I want them to have as much confidence as they can have,” Warrick said. “We have a new setter this year, but most of this team is a veteran group. I want us to be tested early so that we can develop some character. I feel like we can do that over the next couple of weeks.

First serve for Thursday’s match between the Lady Trojans and the Lady Eagles is set for 4:30 p.m.