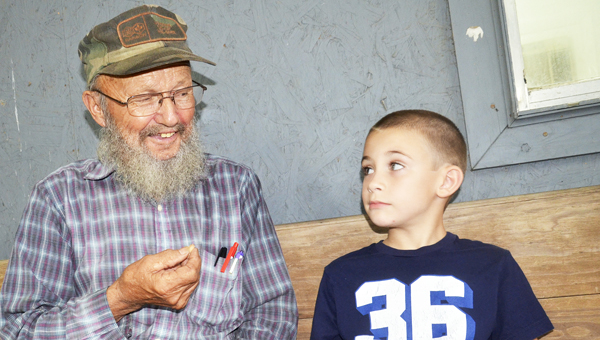 Left, Glenn Mothershed took a break from roasting peanuts at the World Largest Peanut Boil in Luverne to share a bag of boiled goobers and tale with seven-year-old Jackson Ballard, from “around Luverne.” The peanut boil, a Labor Day tradition, will continue through Monday. Sharing a bag of boiled peanuts and listening to a tale well told is a great way to “kill time” on a hot, late summer afternoon. (Messenger Photo / Jaine Treadwell)

Tennessee Ernie Ford sang about 16 tons of number nine coal and that’s a lot of coal.

But, it’s not all that much when compared to 23 tons of boiled peanuts and ton of parched nuts on the side.

And, that’s the tonnage of goober peas that will be boiled, parched, bagged and sold at the 44th annual World’s Largest Peanut Boil in Luverne over Labor Day Weekend.

Andy Compton, secretary and past president of the sponsoring Crenshaw County Shrine Club, said the total tonnage could actually be a ton or so more, “depending.”

“We get our peanuts from Holland Farms in Jay, Florida and they’ll bring in the last load on a flatbed truck Saturday,” Compton said. “Sometimes, they’ll bring in another ton or two. Last year, I think we ended up with about 24 and a half tons. We’ll sell whatever we get.”

Compton stopped short of saying the boiled peanuts at World’s Largest Peanut Boil are also the world’s best, but he did say there aren’t any better.

“The Shriners’ peanut boil is tradition around here — around Crenshaw and Pike counties — just all around,” Compton said. “When Labor Day weekend comes, people come to the World’s Largest Peanut Boil. Children come with their grandparents that probably came when they were children. It’s a holiday tradition. And, too, we get a lot of tourist trade, folks going to the beaches and coming back through.”

So as not to break with their own tradition, around 4 o’clock the Saturday afternoon of “the boil,” the Shriners load up a truck with boiled peanuts and go into Luverne to “walk the streets” selling peanuts.

“Peanuts, get your boiled peanuts!”

“Yeah, just like they did 40-something years ago,” Compton said. “Walking the streets selling peanuts is tradition with us. And, we sell them to anybody that’s on the streets or comes down the road. When they stop at the red light, we’ll pitch peanuts.”

But one tradition the Shriners have not kept is that of boiling the nuts in “wash pots.”

“We used to have 20 black wash pots that we boiled in,” Compton said. “Talk about hot. Standing over the pots, keeping the peanuts stirred for four days and nights was hot, hard work.”

The Shriners now have five vats that will each hold about 600 pounds of peanuts.

The cooking time is about the same, three hours from the time the peanuts start to boil, but the big vats are much less “labor intensive.”

“But, we’re still holding on to the pots. You can’t throw the baby out with the bath water,” Compton said, with a smile.

The Crenshaw County Shrine Club has about 22 members. It takes them all plus “quite a few” volunteers to pull off the World’s Largest Peanut Boil.

Glenn Mothershed has been knee-deep in peanuts all his life. He grew up on a farm and behind a stubborn mule.

Mothershed has been volunteering with the Crenshaw County Shrine Club for “nigh about 40 years” and he mans the roaster, which is now newer and bigger and better.

“The little roasters just wore out and this big one roasts about 60 pounds at a time,” he said. “We sell a lot more boiled peanuts than roasted ones but, me? I like ’em roasted.”

Boiled or roasted, the peanuts are the same price, $4 for a small bag and $8 for a large one.

The Shriners plan to have peanuts for sale through Labor Day but there are no guarantees. So, since all roads lead to Luverne on Labor Day Weekend, it’s a good idea to get on the road, Compton said, with a smile.