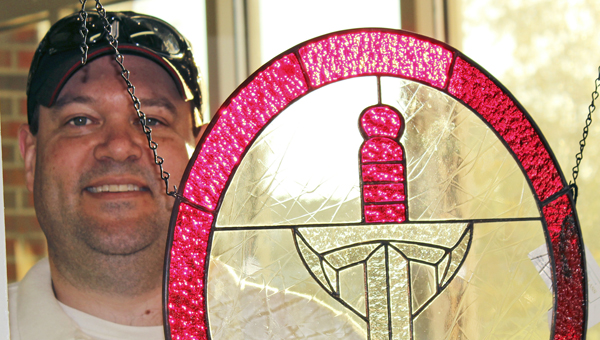 The population of the United States is 316 million and, according to a Marist Poll, 54 percent of the nation’s residents are college football fans.

Knowing all this, David Adams, a CPA by day and a glass artist by night, realized the potential for the marketing of glass art sporting college logos.

But, also knowing the long and lengthy process that could potentially result in a license to sell collegiate logo art, Adams didn’t think it would be worth the effort – initially.

“I had looked into a crafter’s license that would allow me to sell up to 100 items or $2,500 in sales,” Adams said. “But I could only sell the glass artwork at craft shows. If it didn’t sell at the shows, I couldn’t sell it in the store (Adams’ Glass Studio which is owned and operated by his dad, Charles Adams). So, I decided against it.”

Adams’ idea of collegiate logo glass art could have died then and there. However, people kept asking if he had anything with “this” college’s logo or “that” college’s logo.

“People kept asking so in April 2013, I started researching what I would need to do to be licensed to sell glass art with the Troy University logo,” Adams said. “It’s a very detailed process and I needed some good advice and a lot of help. Sohail Agboatwala at the university helped me jump though the hoops. He knew who to contact and he gave me insight into the filing process. I had a lot of questions and he had a lot of the answers. It took months but I got a license to sell art with the Troy University logo.”

The response to Adams’ Troy University glass art was very positive so, in January, he decided to expand the market to include Auburn University and the University of Alabama.

Now, more than six months later, Adams is licensed to sell glass artwork with the logos of the cross-state rivals.

But, even though he had the experience gained in applying for the license for Troy University, it was not easy getting the green light.

Adams had to send each design of every piece of artwork to the Collegiate Licensing Company for approval.

Adams said some of the logos can be stand-alones. Others are not.

“For example, the Alabama elephant cannot be a stand-alone,” he said. “The elephant has to have ‘The University of Alabama’ or some identifying wording with it.”

“With the etched glass, I can do more detailed designs that aren’t possible with stained glass,” he said. “Intricate work done in stained glass would cost millions to produce and I’m not ready for that.”

He said colleges are very protective of their designs and for good reason.

“When you are licensed to sell products with college logos, you pay royalties for that right,” Adams said. “Every piece of artwork that goes out of Adams’ Glass with a Troy University, Auburn or Alabama logo has to be tagged and labeled with a holographic sticker. That protects the rights of the college and it protects me.”

Adams said it is a privilege to be licensed to sell artwork for three great Alabama universities and he takes pride in his work.

“I’ve seen some plastic college logo artwork that looks like stained glass,” he said. “As for as quality, I’ve not seen anything that compares to what we have at Adams Glass Studio. But, then, I might be prejudiced.”

And, Adams is also smart. He lists his favorite colors as cardinal, crimson and blue.