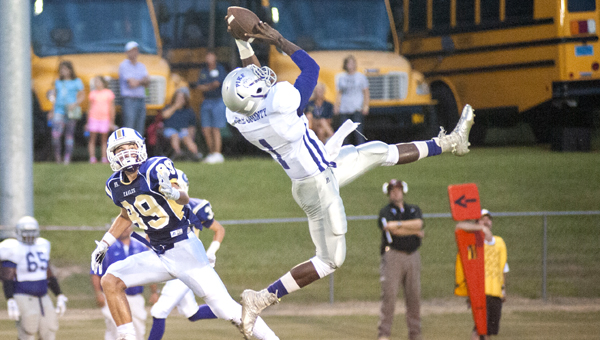 Pike County’s Jerrel Lawson skies for an interception in the first half of Friday’s win. (Photo/Joey Meredith)

The look on Fred Holland’s face following Pike County’s 12-0 win over Goshen Friday night was one of relief.

He watched his team make mistake after mistake during the game, but in the end were able to pull out a hard-fought win on the road.

“I am very proud of the way our guys gutted this one out,” Holland said. “We didn’t play well on every play, but these fellas never let up. We were able to make just enough plays to get the job done and get this W.”

Pike County used one play – jet sweep left – to score both of its touchdowns Friday night.

On the Bulldog’s first play of the game, Cory Battie took the handoff from quarterback Jerrel Lawson and took off around the end.

Battie broke one tackle and stepped through another on the Pike County sideline and was off the races for an 86-yard romp.

Kamari Jackson scored on a 30-yard jet sweep with just 3.9 seconds to go in the third quarter for the Dawgs’ final points of the day.

Jackson zigged and zagged his way through the Goshen defense for the score that allowed Pike County to finally exhale following a tight three quarters.

Battie said the jet sweep play is one of his favorite plays in offensive coordinator Mike Waters’ playbook.

“I love running that play,” Battie said. “Anytime you get a chance to get the ball in your hand as a receiver you love it. When coach called it, I got excited. When I turned the corner and saw the open field, the only thing I thought about was the touchdown.”

Holland liked what he saw from the Dawg D.

“We improved a lot over the last week, but we still have some things to work on,” Holland said. “You know us coaches are never satisfied, but we will take a shutout any day of the week.”

The win for Pike County marks the third-straight over its cross county rival, something Holland knows his players like.

“Those kids play against each other in everything,” Holland said. “It is a big game for all of us, and I know the players like to have those bragging rights.”

Goshen head coach Bart Snyder felt his team played well in spurts, and at other times made mistakes.

“We are sure getting there,” Snyder said. “You can see flashes of really good things, but we just have to be a little more consistent. It will come with time. I am very proud of my boys.”

Goshen travels to Luverne next week, while Pike County will hit the road to face Abbeville.

Both games are set for 7 p.m. kickoffs. 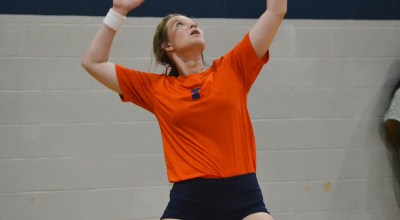