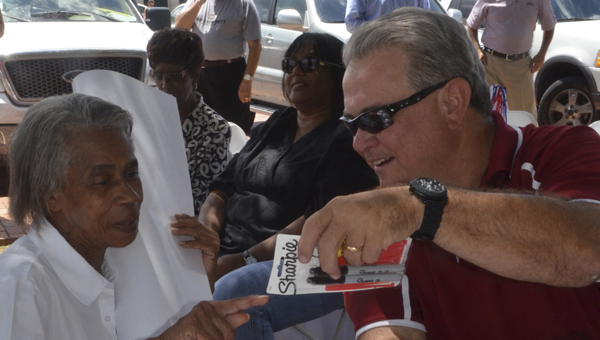 roy University head football coach Larry Blakeney tests out the spelling of a name for Mary Brundidge before signing a poster for her during Wednesday afternon’s Brown Bag event. The event was centered around the theme of kicking off the football season. Blakeney was joined by Troy athletic director John Hartwell. (Photo/Scottie Brown)

Troy head coach Larry Blakeney was sitting on a bench taking in the end of a successful Brown Bag on The Square event Wednesday when an idea popped in to his head.

Dozens of people attended the event, which served as an official kickoff to the 2014 Troy area football season.

“Mayor (Jason) Reeves and his staff did a phenomenal job putting on this event today” Hartwell said. “We appreciate their support of Troy athletics, and the local high schools. They truly care about every one in this community and we are proud to be part of it.”

Shelia Jackson, director of Troy Public Relations and Tourism, said the event was a great way to get fall and football season underway.

“It’s just a great day to have everyone here,” Jackson said. “We’ve got a good crowd and we are very excited everyone came out to support the local teams.”

“Any time you can get the diversity of Troy University and the city to come together, it is a great thing,” Blakeney said. “We want the folks in Troy to come out on Saturday to watch us play, and on Friday nights to cheer on these great high school teams. Today is a grand occasion for all of us, and we look forward to seeing this familiar faces in the stands this year.”

Scottie Brown contributed to this article.