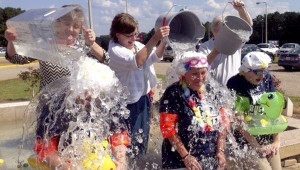 Amy Minor, CNO; Teresa Grimes, CEO and Janet Smith, CFO, took part in the ALS Ice Bucket Challenge Wednesday afternoon. The three created a fundraising event with the challenge. Those wanting to dump the water on the three bought $5 “lucky ducks” for their chance. April Sneed, Alice Teal and Dell Stokes were the winners of the pull and are photoed here dumping the water.
SUBMITTED PHOTO

The TRMC Emergency Department challenged CNO Amy Minor, CEO Teresa Grimes and CFO Janet Smith. The three accepted the challenge, and those who wanted a chance to dump the water on the heads of the CEO, CNO and CFO had the opportunity to purchase a “lucky duck” for $5, TRMC Marketing Director Karen Herring said.

“It was really cute, and the three actually sold the ducks themselves,” Herring said. “Theresa and Janet actually came in early in the mornings and sold them themselves. They came and would sit in the cafeteria so they could hit the night shift and the folks that are coming in in the morning to get their coffee.”

Herring said the hospital was able to raise $500 for the ALS challenge selling the ducks, and the money was matched for the WOD for water charity and the Troy Regional Medical Center Benevolence Fund.

“The O’s decided to donate $500 to TRMC Benevolence Fund, which is an anonymous committee that provides family assistance when family is ill or if something tragic has happened to a family.”

While the group donated $500 to the Benevolence Fund, Herring said the three discussed the idea of also donating $800 to the WOD for water fund.

“The five-dollar match they initially started with the three organizations would not buy one specific item for the water project, but the $800 will provide a whole tank for a family, a rain tank,” Herring said. “It catches fresh rainwater for the families.”

Overall Herring said the event was “really just a lot of fun” for everyone involved. The hospital donated a combined total of $1,800 to the three causes.