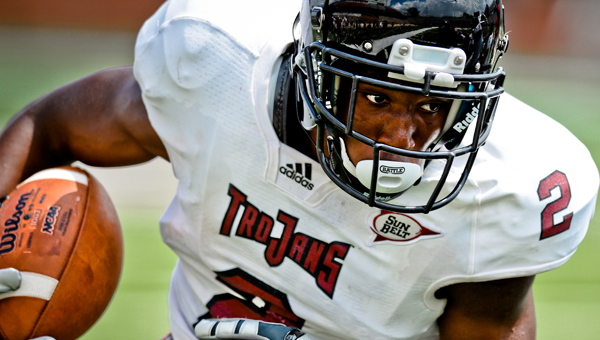 Former Charles Henderson star John Johnson has been impressive in fall camp for the Troy Trojans. Players and coaches feel Johnson can be a difference maker this season. (Photo/TroyAthletics)

Running back Jordan Chunn made an immediate and difference-making impact for Troy during his freshman season in 2013. Can another freshman do so this year? Trojan players and coaches say yes, and all gave the same name – John Johnson – as to who they thought it would be.

There was a time not long ago when freshmen were afterthoughts. Coaches didn’t expect the youngsters to contribute right off the bat, but nowadays the first-year players not only dress with the varsity squad, but many become difference makers the moment they step on campus.

To be held in such high regard is something Johnson takes to heart.

“It really means a lot to hear folks say things like that,” Johnson said. “The coaches see a lot of potential in me, and feel that they made the right decision in recruiting me, now it is my job to prove to them that I can contribute to this team and help it win games.”

Johnson turned in a season for the ages last year at Charles Henderson. The speedy receiver accounted for 2,474 yards and 36 touchdowns during his senior campaign. Johnson led Charles Henderson to the AHSAA 4A Championship game, and broke school single-season all-purpose yards record.

Veteran wide receiver Chandler Worthy took notice of Johnson’s hard work early in fall camp, and saw a little bit of himself in the soft-spoken freshman

“He (Johnson) came in with that attitude that I felt I came in with,” Worthy said. He is just ready to play, hungry for it and not letting anybody stand in his way. When you see a guy like that who doesn’t feel like he’s a high schooler; who feels like he’s been here three or four years already, you know he’s ready to play. That’s why I feel he’s going to have a good season.”

“John Johnson is ready,” Coleman-Dancer said. “He looks real good at practice. He always does the extra, goes the extra mile and does what he’s supposed to do. He’s a playmaker on the field and a pretty good guy in person off the field.”

This time one year ago, Johnson was preparing to play against Bayside Academy in the season opener for Charles Henderson. Now, with his college debut against UAB just days away, he is still adjusting to the higher level of the game.

“College has been just a lot more intense,” Johnson said. “We are always moving and working on something. The speed of the game is huge and your routes have to be perfect. I still have a lot to learn, but feel like I am getting there.”

While Johnson’s name was on the tip of everyone’s tongue this week, he feels there won’t be just one breakout freshman player…but three.

Andre Flakes and Emmanuel Thompson join Johnson in the receiving corps as true freshmen. Flakes, from Milton, Fla., accounted for over 3,500 yards and 32 touchdowns during his career in the Sunshine State.

Thompson, out of Barbour County High School in Clayton, threw for 800 yards and five touchdowns, while rushing for 521 yards and 12 more scores in just six games last year.

“I don’t think it will just be me this year,” Johnson said. “Emmanuel and Andre are both really good football players. If we keep improving and getting used to the new level, then I really feel like there will be three freshmen – Andre, Emmanuel and myself – that will contribute this year.”

“I think John Johnson has some big-play capability,” Edenfield said. “I think Andre Flakes has some big-play capability along with Emanuel Thompson. All three of those freshmen wideouts have a chance to make plays. They’ve made plays in camp, and usually when you’re making plays in camp, you think that’s going to carry over. I could see where all three of them have the capability of doing that.”

Kickoff is set for 11 a.m. at Legion Field in Birmingham.