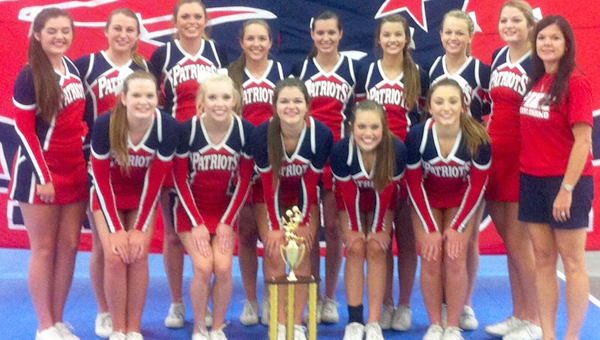 By Ngoc Vo – The Messenger

According to varsity coach Natalie Lankford, the teams only took two weeks off practice during summer.

“They are a great group of girls who work really hard,” Lankford said. “As a coach, I cannot ask for a better (team). They do anything and everything I ask of them.”

Junior varsity coach Angie Grice said she chose her squad in February. The training started in April, Monday to Thursday, three hours at a time, sometimes two times a day.

“It’s a great feeling to go out there for the third year in a row and being able to bring home the tittle,” said co-captain of varsity squad Madison Gilmore.

Prior to the AISA competition, the varsity and junior varsity quads won championships in Universal Cheerleaders Association (UCA) summer camp in July.

“We practiced a lot and it felt hard,” Eden Mobley, JV squad captain said. “But after we won, it’s an indescribable feeling.”

Grice said by winning the two competitions, the team has accomplished both of the main goals set in April.

“We are back to back state champions, which is really hard to do,” Grice said. “I’m so proud of their hard work to reach those goals. The girls are very dedicated to the sport, to building their cheer skills and team work.”

Emma Strickland, JV squad co-captain said the results are well worth the hard work they put in.

“We had an amazing coach,” Strickland said. “She cares.”

According to Lankford, her squad is like her second family.

“It’s hard to get close to them and having them graduate each year,” Lankford said. “All four of my seniors are great leaders, knowledgeable when it comes to cheer leading, active and energetic.”

Lankford expressed her thanks to the faculty, families and students that came to support the teams Saturday.

“It was amazing to look at the crowd and see the Pike Lib teachers and the football players in their jerseys supporting our girls,” Lankford said. “We are proud to represent and win for our school.”

With competition season over, the teams have cut back on their practices, Lankford said. There will be practice two times a week, in some cases three, if they have a home game.

“We hope everyone would come out to watch the games and see our team cheer Friday nights,” Lankford said. “We are 100 percent committed promoting our football team and our school spirit.”