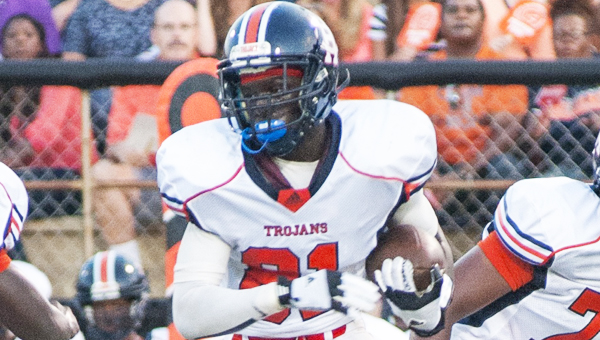 Jalante Smith (81) Smith caught two touchdowns passes last week against Pike County, including this one where he broke three tackles and turned a short gain in to a 65-yard score. (Photo/Joey Meredith)

Jalante Smith sat in the dressing room before the Pike County Classic and thought about quite a bit.

His mind bounced back and forth between the game he was about to play, and his best friend Jacquerean Marshall.

Earlier in the week, he spoke to Marshall, who is still in the hospital in Birmingham following a shooting last month. Marshall gave Smith words of encouragement, and Smith told Marshall that his performance was dedicated to him.

“It was the least I could do,” Smith said. “Jay wants us to keep playing and keep winning. I told him that the Pike County game was all about him.”

The Pike County Classic was Smith’s first significant varsity action of his career. He didn’t disappoint.

The young receiver hauled in six passes for 127 yards and two scores. His first touchdown came on a short completion in which he broke three tackles and outraced the Bulldogs to the end zone.

“I caught the ball and felt one defender grab my shoulder pads,” Smith said. “I shrugged him off, and then spun past another one. I looked up and saw daylight then and took off as fast as I could. I knew I had to get to the end zone for my team and for Jay.”

Smith’s second touchdown of the game came early in the fourth quarter.

Charles Henderson quarterback Austin Ingram threw a fade route on a second down play to the back corner of the end zone, and Smith went up over the top of a Pike County defensive back to bring in the score.

“When that ball was up in the air, all I was thinking about was making the catch and getting my feet down,” Smith said. “I knew I was in bounds because I heard the crowd go wild and looked up and saw the referee calling a touchdown. That play was one I will remember for a while.”

Entering the 2014 season, some questioned whether the Charles Henderson offense could keep pace with what the 2013 team did.

Top receivers John Johnson and Josh Noel were gone. Smith and a handful of unproven, inexperienced wide outs were left to fill the void.

Trojan offensive coordinator expected Smith to play well, and looks forward to seeing the next receiver to step up.

“Did I expect Smitty to play well,” Jordan said. “You betcha. Now, we have to see who the next young kid to step up will be. Smitty also has to keep in mind that Pike County was just one game. The most important game is the next one. I think all of them know that.”

“I’ll tell you what, he gets the job done, and I saw that three weeks ago,” McCoy said after the game Friday night. “This kid has got some ability and he seems like he’s got that ‘want-to.’ He wants to improve every week and he showed it tonight.”

Following the big win, Smith celebrated with his teammates. But knew he had to make a phone call first thing Saturday morning.

He woke up, grabbed his phone and made the call to Marshall.

“I told Jay about the game and he told me ‘That is what I expect every week,” Smith said. “I want to do it again next Friday because he will be there. This is just the first game of a lot.”