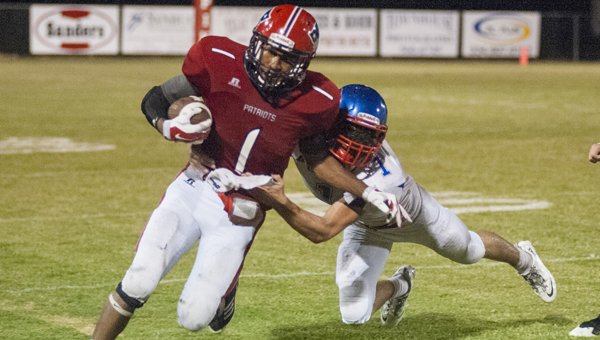 The Pike Liberal Arts Patriots walked on to their field Friday evening determined to start this new football season off on the right foot, and were able to get the best of Macon-East Montgomery Academy in a battle by a score of 20-13.

Early in the first quarter both teams struggled to find an identity as open drives stalled for each team.

Pike Liberal finally gained some footing late in the first quarter with an electrifying 57-yard touchdown off a bubble screen by junior receiver Marquese Christian.

This was the first of several highlight plays from the combination of Christian and senior quarterback Drew Starling, something that Patriots head coach Gene Allen hopes to see a lot of this season.

“They’ve developed a little bit of a camaraderie,” said Allen. “They did that some last year so we’re hoping that they carry that over.”

Of the nine times that Starling targeted Christian he was able to grab five passes for a total of 145 yards and two scores, the other being a 29 yard reception on the opening drive of the second half to give Pike Liberal a 14-7 cushion.

Macon’s running game kept the pressure on the Patriots behind a 186 yard effort from senior running back Tyler Sheehan that included a blistering fast 67-yard sprint up the right sideline to the game at seven all early in the second quarter.

Allen expected a more run oriented attack for his team, but his team was able to take what was given to them through the air in route to their season opening victory.

“We worked really hard this summer, it’s just big,” said Allen. “Our seniors wanted to win this one very badly. It was hot and the heat was tough to overcome, but we’ve been preaching for them to overcome all week so I thought they did a tremendous job.”