A TALE OF TWO HALVES 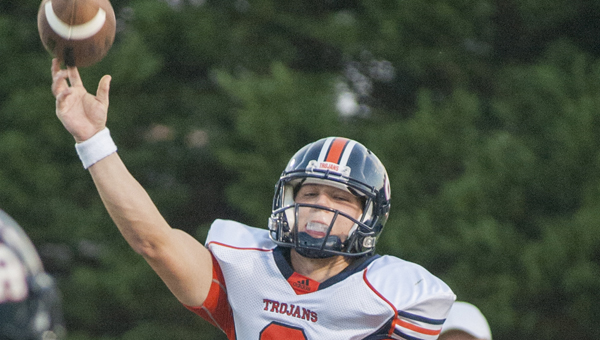 Charles Henderson quarterback Austin Ingram (9) looks for a receiver down field early in the Pike County Classic Friday night. The Trojans would win the game for the sixth straight year. (Photo/Joey Meredith)

The Charles Henderson players had heard the same phrase all week. It had been said over 1,000 times and beat in to their heads over and over again.

“Start fast, get on them early.”

The Trojans answered the call.

Charles Henderson scored four times in the first half, including three touchdowns, en route to a 31-18 win over Pike County in the Pike County Classic.

The Trojans moved up and down the field with ease in the first half, netting scoring drives of 46, 69, 37 and 39 yards.

However, the Trojan offense sputtered somewhat in the second half, allowing the Bulldogs to claw their way back in to the game late.

“We talked about it at halftime about complacency,” Holland said. “I know it’s hard when you’ve got a lead at halftime and you think things are going you’re way but about that time is when things will turn around on you in a hurry and we told them if we give them anything at all they’re going to capitalize on that. Pike County, they don’t have many numbers, so the numbers they’ve got are very good football players and they understand how to play the game. We can’t do that with anybody we play.”

The Trojan defense kept the athletic Pike County offense in check for the majority of the evening, and didn’t allow a score until late in the third quarter.

The unit forced four turnovers en route to the win.

McCoy loved the way both of the units hustled all night.

“I was proud with the way both sides played at times, it was just a little bit inconsistent and I don’t want our guys to think we’re down on them at all,” McCoy said. “Any time you come on the road and you get a win, it’s a positive. I’m excited about it. We knew Pike County was going to be better. We had a lot of young guys trying to figure out exactly what we’ve got to get better on, but I think this game is something that we’re going to go back, we’re going to review the tape tonight and half a day tomorrow and we’re going to try to figure out what we’ve got to get better on.”

One of Charles Henderson’s young players stepped right in to fill a vacant spot.

Receiver Jalente Smith reeled in seven passes for 127 and two touchdowns in the first significant game action of his career.

Ingram found Smith for the Trojans first score of the game on a short pass that Smith broke in to a 65-yard score.

On his way to the end zone, Smith broke no fewer than three tackles and outraced the Bulldog defense to the Promised Land.

In the fourth quarter, Smith out jumped a Bulldog defensive back to haul in his second score of the day, and draw praise from McCoy.

“Wow, Smitey is a player man,” McCoy said. “I’ll tell you what, he gets the job done, and I saw that three weeks ago. This kid has got some ability and he seems like he’s got that ‘want-to.’ He wants to improve every week and he showed it tonight. And that’s what I’m saying. I don’t know if it was so much execution of how the play was drawn up, but we made some doggone good plays during the first half just making plays, throws and catches and everything else. Our pass protection was good at times, so we’ll take it for sure.”

Charles Henderson’s win is the sixth straight over their rivals to the south.

The Trojans now turn their attention to their season opener against the Daleville Warhawks next Friday.

“They’re going to give us a different look on offense and some different things on defense than these guys gave us. Luckily we’ll have video to scout and hopefully breakdown and prepare maybe in a little bit better fashion that what we had with these guys, but we just got to get better at a lot of things, but I think the fundamentals have got to improve.”

Kickoff for the Trojans’ season opener is set for a 7 p.m. kick from Veterans Memorial Stadium in Troy.

Fred Holland doesn’t like to lose. In fact, he hates it.

“One thing about it you know you don’t expect to start off the first half with a fumble first play of the game,” Holland said. “It’s just a little adversity we faced with the turnovers. Mistakes we made early, but I feel like our guys played better in the second half.”

Friday’s Pike County Classic couldn’t have started any worse for the Bulldogs. Literally.

On the first play from scrimmage, Deshon Cowling fumbled and Charles Henderson recovered. Eight plays later, the Trojans took the lead on a field goal.

They would never relinquish it.

Pike County went three-and-out on the next possession, giving the ball right back to the Trojans.

Three plays later, Charles Henderson was in the end zone following a 65-yard pitch and catch from Austin Ingram to Jalente Smith.

Charles Henderson took advantage of yet another Bulldog turnover early in the second quarter.

Following an interception and 20-yard return by Bryson Gandy, Ingram hooked up with Kobe Griffin on a 4-yard scoring strike,

One final first half turnover by Pike County, a fumble by running back Kamari Jackson, set Charles Henderson up in prime scoring position once again.

The Trojans went on a 12 play, 37-yard drive, capped off by a 1-yard scoring carry by Jared Wilson.

The Bulldogs gained just 66 yards of offense in the first half, and Holland felt it was just one mistake after another.

“You know, it was tough,” Holland said. “Some of us made it, some of us didn’t. We’ve just got to work a little bit harder you know maybe we can stay in a whole game. Like I said, I’m proud of the kids for fighting back and doing what they did you know. They played a lot better doing the fourth quarter.”

However, the second half saw the Bulldogs come to life.

Quarterback Jerrel Lawson led the Bulldog offense on two impressive scoring drives in the third and fourth quarters, and the Pike County defense got in on the scoring as well.

With 1:50 to go in the third quarter, Lawson found Cory Batie in the flat on a swing pass. Batie made a leaping catch to haul in the high pass, and bulled his way in to the end zone for the Bulldogs’ first score of the night.

In the fourth, Lawson led the Dawgs on a nine play scoring drive that featured a 39-yard completion to tight end Stevie Smiley. Lawson scored on a sneak from a yard out.

Smiley showed off his speed once again, just two plays later. He stepped in front of an Ingram screen pass, picked it off and out ran the Charles Henderson signal caller to the end zone for a 35-yard pick six.

Holland liked what he saw in the second half from Smiley.

“Well, one thing you know he came in a little gassed at half,” Holland said. “We talked about finishing, leaving it all on the field, don’t bring anything back inside with you. I think he had a couple of opportunities to make some plays in the first half and didn’t, but we finally got one of those plays late in the fourth quarter. I am proud of him for just continuing to stay with it and fighting his way into the end zone.”

Pike County now readies to travel across the county to open the regular season against Goshen next Friday. Pike County routed the Eagles last season, but Holland feels his team has quite a bit to work on over the next week.

“We have to work on everything,” Holland said. “I don’t think there is any phase of the game that we don’t have to work on. I’m glad we have seven days, or however many days we’ve got to be able to get ready for that football game, because it’s going to take all of them to be able to do it, so I feel like our kids will bounce back form this and you know get ready for Goshen. “