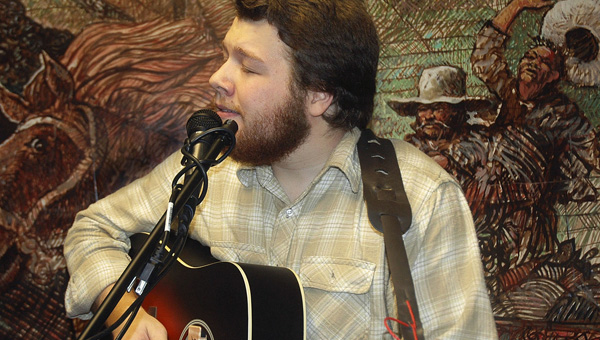 James Mullis, folk and blues, artist, will be in concert at studio 116 in downtown Brundidge Saturday night beginning at 7:30 p.m.

James Mullis, folk and blues artist, will be the featured performer at studio 116 in downtown Brundidge Saturday night.

Mullis sings the blues in a folksy kind of way that is almost mesmerizing, said Chris Rich, studio 116 co-director, Mullis sings a potato chip style of music. It’s like trying to eat just one potato chip. You can’t do it.

“When you hear James Mullis sing you want to hear him sing again and again,” Rich said. “James has been at studio 116 before with Perry Brown and Fire Mountain. We are excited to have him back as the featured performer.”

Mullis, a local talent, has recently moved to Birmingham and is playing his kind of music in the big city. However, Mullis said he loves to play for the home crowd and is looking forward to being back at studio 116.

Also on stage at studio 116 Saturday night will be Wilder Adkins, a folk-musician and hymn singer from Birmingham. He is one of the more popular folk singers in the Birmingham area and recently received the songwriter’s award for the greater Birmingham area.

Adkins will sing his own songs in a venue that is becoming a haven for local songwriters.

Studio 116 hosts songwriting workshops and artists get together for them to talk about the songs they are writing and where their writing is headed, Rich said.

“At the song writing workshop last week, we had five people with songwriting backgrounds,” Rich said. “They were able to provide valuable feedback to the new writers.”

The workshop included two nights and a Saturday morning of collaboration with a Saturday night concert.

“The songwriters worked together to add lyrics to the music and music to the lyrics,” Rich said. “Some of the songwriters had great lyrics but no music while others had music but no lyrics.”

“Ideas are bounced around and feedback and guidance from others is beneficial,” he said. “We had six first-time songwriters at the last workshop and the more experienced writers were aware when lyrics were out of rhythm or the sound was good but the lyrics didn’t really fit. The workshop was a good learning experience.”

Often a songwriter gets “so far” into a song but can’t finish it, Rich said.

“One of our young songwriters had a really good song but needed help in completing the lyrics,” he said. “That’s what is so good about songwriters’ workshops – the feedback and guidance that make you a better songwriter.”

Rich said six new songs came out of the recent songwriters’ workshop at studio 116. One of those was “Down at the Fishing Hole” by Greg Alton, who will perform his song Saturday night at studio 116.

The “James Mullis folk and blues” concert will begin at 7:30 p.m. Adkins will open for Mullis. Tickets are $8 for individuals, $15 for couples. Tables will be available for those who want to tailgate indoors while enjoying the music.