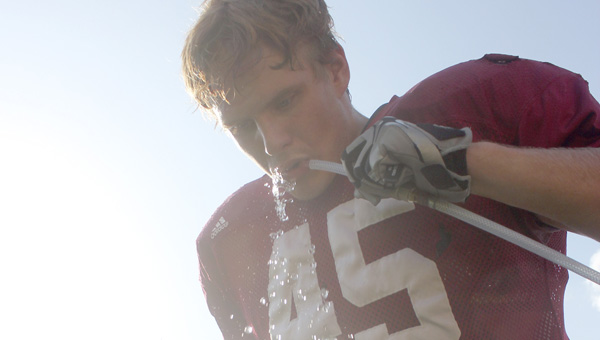 Daniel Warren cools off during a hot, muggy Troy football practice Thursday afternoon by getting a sip of water from the team’s water cooler.
Messenger Photo/Ryan McCollough

The National Weather Service in Birmingham has issued a heat advisory regarding an expected period of increased temperatures from 11 a.m. Friday to 9 p.m. Saturday.

According to the announcement, temperatures will be range from the mid-90s to near 100 degrees. In cases of higher humidity, heat indexes will range from 102 to 108 degrees.

“The heat will affect all of the central Alabama area including the South East with Pike County,” said meteorologist Jody Aaron. “We often get substantial heat during summertime, but we haven’t had it too bad yet. We are likely to have a prolonged heat period. People should protect themselves and try to conduct outdoor activities early in the morning when it is coolest”

“Drink. Drink. Drink all the time…not coffee, drink something light and cool,” Gilbert said. “Water is the best.”

According to Lt. Curtis Shaver with Troy Fire Department, right now, wood fire risk is low because Troy has had plenty of rain.

Shaver said old people and the young are more susceptible to heat related illnesses. However, Shaver’s station has fewer emergency cases with the two age groups because they are more cautious.

“Heat exhaustion is a true medical emergency,” Shaver said. “(With heat exhaustion) you work yourself to fatigue and lose water to a point it greatly affects blood circulation. With a heat stroke, it’s beyond emergency. Your body cannot even sweat. Seek medical care immediately.”

Shaver advises to hydrate a proper amount when such conditions happen. It is recommended to move out of the heat and place cool patches or wet towels on body areas where you have high blood flow like wrists, neck or underarms.

“Just something cool like faucet water, not ice,” Shaver said. “(Too low of temperatures) can shock your body. When you cool yourself down after getting overheated, you have a greater chance to relapse if you re-enter a hot environment too soon. You have to rest for a while.”

According to Brad McCoy, Charles Henderson head football coach, the athletes have been struggling at practice because of the heat.

Wednesday was the first day the team practiced out in the filed in the afternoon, due to the rain early Monday and Tuesday morning.

“We could tell that the heat affected (the students),” McCoy said. “There were dramatic differences in their energy level and how much fluid they are losing. It was only a 90-minute practice. It’s a dangerous situation. We’ll take all precautions and keep up with the weather conditions to make sure that we are prepared for practice.”

McCoy said the trainers advise students to alternate between water and Gatorade to stay hydrated. They warn against soft drinks and carbonated beverages.

“It’s how much you drink two or three days leading up to the event,” McCoy said. “It’s a cycle drinking the correct fluid. You cannot wait till the day of the event. It’ll be too late.”