No Tank, no problem 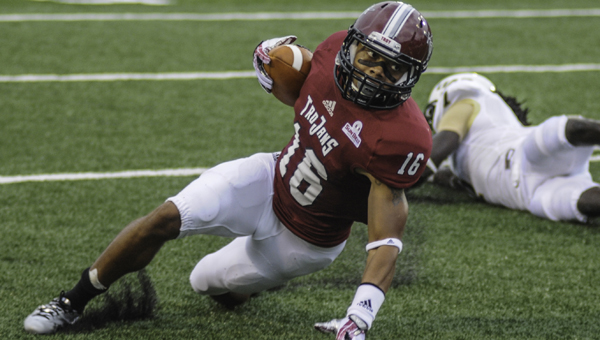 Chandler Worthy is one of the top returning receivers for Troy this season.

Chandler Worthy’s answer was short and to the point.

How does Troy replace Eric Thomas?

Thomas, the Sun Belt’s all time leader in receiving touchdowns, is now catching passes from Andrew Luck in the NFL.

He isn’t coming back through those locker room doors to suit up for the Men of Troy, but the receivers that are working together to keep the Trojans offense clicking along.

“No one guy can replace what E.T. Did,” said veteran wideout K.D. Edenfield. “The whole group is working, Chandler, Bryan (Holmes), Tommy Blevins, to keep this thing moving. It won’t be one person doing it all, but a bunch of guys catching passes.”

Holmes, Edenfield and Worthy combined for 1,325 and nine touchdowns in 2013. Thomas accounted for 993 yards and 12 touchdowns by himself.

What some see as a hole in the receiving corps, Worthy sees as a chance for other players to step in and shine.

“There may not be an Eric Thomas, but there is a Bryan Holmes and a Chandler Worthy and a K.D. Edenfield and a bunch of other great football players,” Worthy said. “We want to come out and show that we can play too.”

“Sixteen (Worthy’s jersey number) is key to us,” Blakeney said. “If he can keep making plays like he did today, then he will make them guard him and double cover him and everyone else will be open. Anytime you can make big plays in the passing game, it helps open things up for the running game, as well as the short and intermediate passing game.”

With Silvers having the edge in the quarterback race, Edenfield feels it is important for the receivers to run solid, precise routes, in order for the inexperienced quarterbacks to get a sense of where the receivers will be during game play.

“Dallas (Tidwell) is really the only quarterback with game experience,” Edenfield said. “It is super important for us to help the QBs out anyway we can, and one easy way to do that is by running good routes. We can make their job a lot easier by getting open and making plays. We want to score and that happens when all 11 guys are on the same page.”