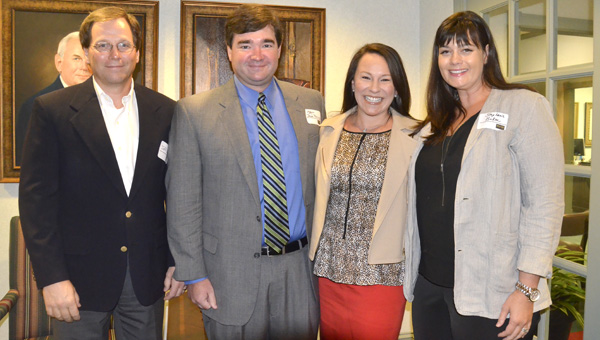 Rosemary Elebash, the state director for National Federal of Independent Businesses, was at the meeting and said she was thankful Roby is willing to spend time with the small businesses in not only Troy, but also across the state.

“This is their opportunity to talk to their elected official about issues that they’re facing everyday in their business,” Elebash said. “When you think about who small business is and their impact on the economy, it’s pretty startling. Ninety-seven percent of businesses in Alabama are independently owned, so they’re truly the job creators. That’s not an NFIB statistic, even the governor will tell you the same thing.”

More than a dozen leaders from local businesses and government participated in Tuesday morning’s roundtable. The meeting was closed to the public, but Elebash said the topics were generally the same through every meeting being held throughout Roby’s district.

“She’s had the opportunity to understand more about the businesses, why they’re struggling and the obstacles they’re encountering,” Elebash said. “There are a lot of employee issues. They’re looking for a ‘ready to work’ workforce. There are obviously some barriers there.”

“When there are pieces of legislature that I know directly affect individuals, business owners’ bottom line, to be able to hear their stories and relate that to may colleges in effort to pass a bill or not, to have that information directly from my constituents is very important,” Roby said.

The meeting was a chance for business owners to speak candidly to their congressmen and Roby said she thoroughly enjoyed the experience.

“It’s very important during this August to travel around the district and spend time with my constituents,” Roby said. “It makes me a much better congressman in Washington if I can represent the conscience of the people back home. It’s very, very important that I spend time with these people all throughout the district and listen and answer questions.”