With Pike County Classic looming, Charles Henderson is getting down to business 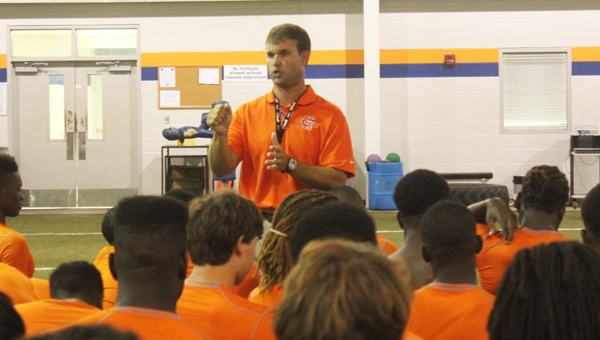 It doesn’t count in the standings, but don’t even try to tell the Charles Henderson Trojans that Friday night’s game against Pike County doesn’t mean anything.

The Trojans began Classic week with a split practice session Monday. Charles Henderson got the bulk of their work in during the morning, and fended off the late afternoon thunderstorms with a “mental day” inside the shelter of the indoor practice facility.

While most of the teams across the state of Alabama were sent scattering to the basketball gym or forced to cancel practice all together, the Trojans were able to get quality time and reps indoors.

“You can’t say enough about this facility,” Charles Henderson head coach Brad McCoy said. “There is no doubt that it can give us a leg up on other teams around the area. We aren’t in a cramped gym or in a classroom watching film. We were able to get a lot of work in today, and that is thanks to this great indoor area.”

With the preseason game just a few days out, McCoy and his staff are ramping up the intensity at practice.

Following Monday’s afternoon session, McCoy gathered the entire team together to remind them about doing the little things right and being disciplined.

He feels the little things will become large on Friday.

“We are just trying to make sure our guys are ready to play no matter if it is Pike County, Greenville or Northview,” McCoy said. “Four good days of practice equal four good quarters on Friday. That is our main goal right now.”