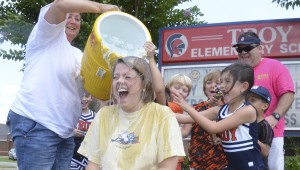 Troy seems to have gotten the ALS Ice Bucket Challenge fever as another resident of Troy participated in the challenge Saturday afternoon.

Heather Bunn, a first grade teacher at Troy Elementary School, was joined with parents and students Saturday in front of the elementary school as Bunn accepted her challenged from Wally Lowery, a member of the school board, and Dr. Hicks, the school superintendent.

“They did a combined challenge,” Bunn said. “They were challenged by Mayor Reeves. Last night they did their video together. It was actually Wally who called me out. I didn’t even have one of the big buckets.”

ALS, or Amyotrophic lateral sclerosis, is commonly referred to Lou Gherig’s Disease. It is a progressive neurodegenerative disease that affects the nerves in the brain and the spinal cord. Those who receive a challenge must accept and then challenge three other people within in 24 hours. If the challenge is not accepted, they must donate $100 to the ALS Association, which helps with research to fight the disease. Bunn said the challenge was a great way to promote awareness of the disease and hopefully fund research.

“It’s a great way to promote awareness for ALS, which affects so many families,” Bunn said. “Several of my friends’ families in particular. I wouldn’t just any day jump at the chance to have ice water poured on my head, but if it’s something that can promote awareness and hopefully raise money for research then absolutely I’m willing to do this.”

Bunn was joined Saturday with many of her first grade students, and she said she hoped it would encourage them to think of others before themselves.

“I think it definitely sets an example for them that we should consider others greater than ourselves,” Bunn said. “If we can make a fool out of ourselves for the benefit of others that’s OK.”

Bunn finished the day by challenging three people of her own, and encourages them to help raise awareness for ALS by participating in the ice bucket challenge.

“I’m going to challenge Theresa Sims, who is the elementary school principal, Stacy Graning, with The Messenger, and Russell Baker,” Bunn said.