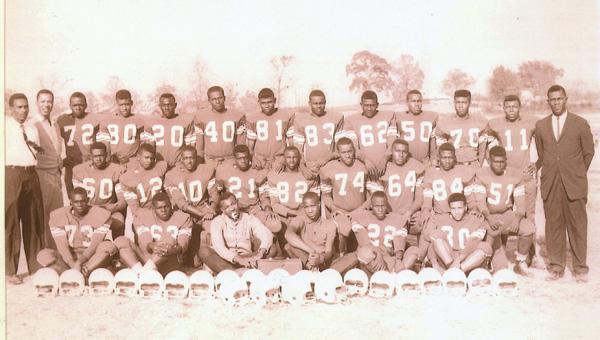 Joseph E. Boyd, Jr. didn’t try to hide the tears in his eyes.

They were tears of personal joy and deep appreciation.

Boyd, who organized and coached the first football and baseball teams at Hillcrest High School in Brundidge, was honored Saturday by his former football players for his guidance, leadership and hard disciplinary actions.

Boyd said he was so honored that, after 50 years, the players still remembered him that he was moved to tears.

“This meant a lot to me,” he said. “It’s been a long time since we cleared that patch of sandspurs and made a football field at Hillcrest High School.”

If Boyd ever had any reservations about his chosen career, they were put to rest Saturday as his former players paid tribute to him and acknowledged the positive impact he had on their lives.

Boyd played football and baseball at George Washington Carver High School in Montgomery, his hometown. He made all-city and all-state teams in both sports. But Boyd’s a quick bat, swift feet and strong, accurate arm got the attention of talent scouts.

“God blessed me with natural ability,” Boyd said. “I had a lot of people that supported me and encourage me – and, pushed me.”

When Boyd graduated high school, the Dodgers, Cardinals and Yankees were knocking at his door.

“I could have played professional baseball but back then blacks didn’t get much of a chance to move up in the league,” he said. “I would have gotten lost down in the farm system. I decided to get my education first and then see what opportunities I had.”

He attended Alabama State College and number 32 made an impact on the gridiron.

“I was a running back,” he said. “Played halfback and offensive and defensive end. We never finished under 500 and won the SIAC championship.”

When Boyd graduated college, he accepted the job as recreation director at the Carver Recreation Department in Montgomery.

When Boyd had the opportunity to teach at Hillcrest High School, he also accepted the challenge of fielding a football team at the request of Principal M.E. Graham,

“I bought enough uniforms for three teams of 11,” Boyd said. “When Mr. Graham saw how much it cost, he had a fit. But we had a football team.

“We didn’t know a lot about organizing a football team. At first, we played against each other.”

“Back then, there was no such thing as classifications,” Boyd said. “We played anybody. We played football.”

Boyd remembered a game against Luverne when he took a team of black football players to play a team of white players.

“We went down there and beat ’em,” he said, with a chuckle. “The referees tried to cheat but we won anyway. Hillcrest had outstanding teams because the players learned fast and wanted to win. My last year at Hillcrest, we were undefeated in football and went to the playoffs in baseball.”

In 1977, Boyd made the move from coaching to administration. He was the first black administrator at Pike County High School. He knew there would be challenges but he welcomed the opportunities before him.

But, once a coach, always a coach so Boyd readily “jumped” at the chance the help coach the football team.

“The school was integrated but Coach Bob Booth laid the foundation for the team to be successful,” Boyd said. “Before that PCHS was not wining games, but we started winning. We played good, hard football.”

Boyd has fond memories of the teams and players he coached. However, the Hillcrest High School 1964 football team has a special place in his heart.

Boyd said Tyrone Frazier was a little kid so he was holding the dummies for the players to hit but he wanted to hit somebody.

“So, I told him to get out there and tackle a big running back and he did,” Boyd said. “And, the next one and he next one. I asked him which jersey he wanted. He turned out to be the best defensive end I ever saw.”

Following the 50th anniversary celebration, Frazier shook Boyd’s hand and thanked him for making a boy into a man.

“That meant more to me than being a big league player,” Boyd said.