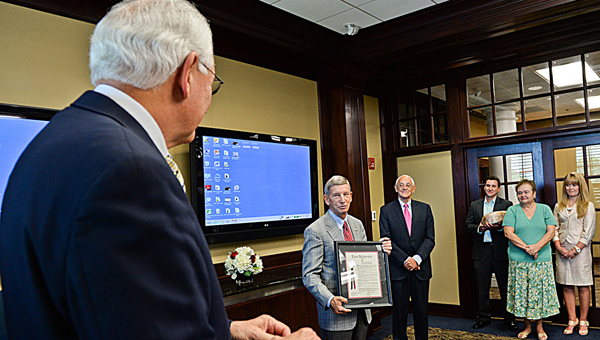 Troy University’s retiring Senior Vice Chancellor for Advancement and External Relations Dr. John Schmidt reacts to the presentation of a resolution by Board of Trustees President Pro-tem Gerald Dial, to his right, renaming the Student Success Center in honor of his service to the University’s students as Chancellor Dr. Jack Hawkins Jr., left, and his family look on. (Messenger Photo / Mona Moore )

A man whose work had a lasting impact at Troy University will continue to influence first-year students, thanks to the renaming of a building.

The university has renamed the offices housing first-year studies the John W. Schmidt Student Success Center, in honor of the retiring vice chancellor.

The center provides resources for incoming freshmen, including computers and electronics as well as counseling.

Chancellor Jack Hawkins Jr. said Schmidt had earned the honor by being an extraordinary leader and dedicated Trojan. “He has served us well for years and is probably one of the greatest Americans I’ve ever known,” Hawkins said. “He is a patriot, he is a family man and at his heart, has integrity.”

In the last two decades, Schmidt has been a facilitator in the construction of Trojan Village and the Newman Center. The resolution listed several of his accomplishments. Schmidt led the university’s first two capital campaigns, raising more than $200 million in the process. He helped start the campus bus system that runs throughout the City of Troy and had a hand in bringing the new aviation program, CGI and the new IT center to Troy.

Schmidt is proudest of his role in creating a reading service program and first-year success program for new students. “It’s something we worked collaboratively on,” he said. “For the campus reading program, we had students read a book before they came to campus so that they would have a love of learning before they ever started.”

The program played a part in increasing the university’s retention of freshmen.

Schmidt thanked the board for the honor, and told them about the question on his desk, which he read every day.

“It says, ‘What does it mean to students?’ That really guided my whole focus,” he said.

When Schmidt decided to get a doctoral degree, Hawkins encouraged him to pursue something that would benefit the university.

Schmidt focused on freshman studies. “The center is the expanded version of his concept. It was that research, that leadership that led to the program we have today,” Hawkins said. “Our trustees felt it would be appropriate since he developed the program that led to the center, that we name the success center after him.”