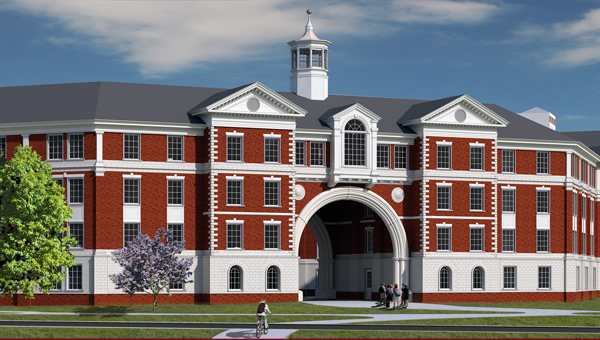 Submitted Illustration
Above is a portion of an artist’s rendering of the completed residence hall where Alumni Hall formerly was located.

The residential hall that will eventually stand where Troy University’s Alumni Hall once was will not have much in common with its predecessor.

“These are state-of-the-art dorms,” said Mike Fleming of Whaley Construction, project manager of the dormitory. “They are going to be nice dorms.”

The residence hall will be coed and may go by another name once it reopens, said Burks. Most of the rooms will be single-occupancy. “What we’re trying to do is look at what students want,” said Sara Jo Burks, assistant director of housing and resident life. “Most request single rooms. These will be that type.”

“One thing it will have that others don’t is a double bed,” Burks said. “It will not have twin beds.”

Each dorm room will come equipped with a 42-inch flat screen television that will double as a computer monitor for many occupants. The rest of the technological features will be chosen closer to the project’s completion in the fall of 2015, said Burks.

“Technology advances so quickly. Who knows what will fall within our budget by then,” she explained.

Game consoles for the meeting areas are one of the options under consideration.

A fourth-floor walkway will join two wings, serve as a meeting area and have large windows with views of the amphitheater and dining hall.

Construction continued this week with one feature that was definitely not a part of Alumni Hall: a large safe room fit to comfortably hold more than 400 people.

Burks said the safe room was a construction code requirement for buildings that size.

The building will also be equipped with elevators, something that was lacking in Alumni Hall.

The price for students who reside in the new hall has not been determined, but the more private a room is, the more it costs, Burks said. Students will pay extra for the technology as well.