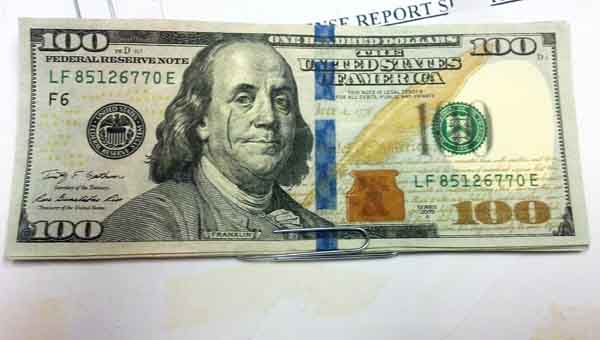 Several counterfeit bills were distributed in the area and the Troy Police Department recommends checking all denominations.
SUBMITTED PHOTO

The Troy Police Department issued a warning to local business owners who accept large bills. Those bills may be counterfeit. Walmart reported seeing several $100 bills in the past few days, according to Lt. Bryan Weed.

There’s always a counterfeit bill floating around Pike County, but having several in a matter of days is a rarity. The recent ones have all been large bills, but Weed said counterfeit come in all denominations.

“We just want to remind people to make sure they check bills,” he said. “Business owners may also want to invest in small machines or pens that can be used to identify counterfeit bills.”

Pens and machines are not always the answer, but Weed said a cursory check would have identified the current set of bills as counterfeit.

Three years ago, a suspect tried to use counterfeit bills at Piggly Wiggly grocery stores in Brundidge and Troy. Identifying pens did not work because the paper used was real. Suspects washed bills of a smaller denomination several times and then printed a new denomination over them. Cashiers caught the mistake when they compared watermarks to the faces on the bills and saw that they were not a match.

There is always a telltale sign that money is counterfeit. Weed advised cashiers to study the identifying marks all American currency possess.

The paper used for U.S. currency contains 25 percent linen and 75 percent cotton with randomly disbursed red and blue security fibers. They contain watermarks, portraits, 3-d security ribbons and the first letter of serial numbers for any series year is the same (E is 2004, G is 2004A, I is 2006 and so on). A dozen additional characteristics exist. Those for the newest currency may be studied on www.newmoney.gov.

Weed said investigators are working with loss prevention workers at Walmart to identify the people passing counterfeit from surveillance footage and register tapes.

In the meantime, the best way to fight passing counterfeit is to diligently check each bill and contact local authorities when one is spotted.

“Any business that has received a counterfeit bill should report it to the police department,” he said.