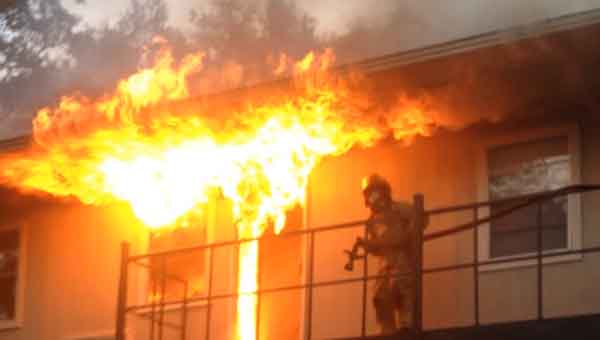 Firefighters work to put out flames at a fire at Oakdale Apartments on Park Street Wednesday night. Jerome Owens is suspected of arson and is in custody. (Messenger Photo / Contributed)

A man suspected of arson is in custody after fleeing the scene and biting a law enforcement officer.

Jerome Owens fled the scene of a fire at Oakdale Apartments, 802 Park Street, and was apprehended by law enforcement from the Troy University Police, Troy Police Department and Pike County Sheriff’s Office. He was caught in an alleyway between the gravel parking lot directly behind Hawkins Hall and an apartment complex on John M. Long Drive (formerly Collegedale Drive).

After biting a university police officer, Owens was charged with second-degree assault and resisting arrest. He was taken away in an ambulance due to the nature of his health at the time, said Troy University Police Detective James Taylor.

“He was taken for observations as a precaution because we didn’t know what he was on, but he did have some health problems,” Taylor said.

Owens, who lived in the apartment where the fire erupted, was witnessed placing something in the apartment shortly before alarms sounded. Weed said it may have been what started the blaze, but that is purely speculation until the fire department completes its investigation.

Fire Chief Thomas Outlaw said the cause of the fire has not been determined. “We’re still working on that. A member of the state fire marshal’s office examined the apartment with our fire marshal,” he said. “We’re just getting a second set of eyes to look at it.”

Outlaw said the fire appeared to start in the living room area, which corroborates with what witnesses told investigators.

The fire affected four third-floor apartments at Oakdale. “It pretty much destroyed that first apartment. Three others had smoke damage,” Outlaw said.